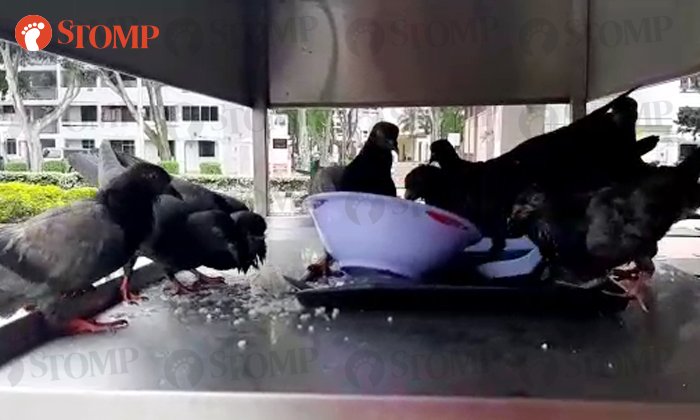 Hungry pigeons have taken uncleared dishes and trays at Circuit Road Food Centre as an open invitation to start feasting.

Stomper Eddy said this has been going on at the hawker centre, which is located at Block 79 Circuit Road, for some time but recently "got worse".

He shared 39 photos and 10 videos taken over several visits to the hawker centre, showing uncleared dishes and trays left on tables, as well as numerous pigeons eating from them.

In one video, several pigeons can be seen eating grains on a tray return station.

Eddy, a resident in the vicinity, told Stomp: "The birds fly all around and leave faeces everywhere.

"Even though some patrons return their own dishes and trays, the cleaners still have to clear them away from the tray return station and return them to the stalls, which I don't think is efficient enough to solve the issue.

"And sometimes, plates are left uncleared on tables for at least 20 minutes."

Eddy, who cited hygiene concerns, had also provided feedback to the authorities but said the situation persists. Therefore, he decided to share it on Stomp.

Check out all the photos in the gallery.