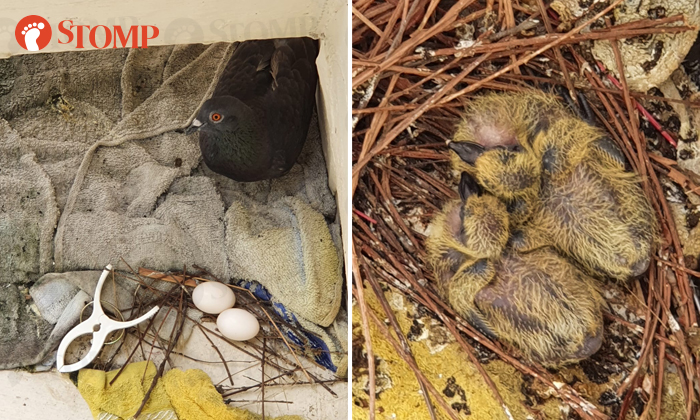 When Stomper Rose dropped a towel on her window ledge at Jurong West Street 71, she did not expect it to lead to life's miracle months later.

Rose, a resident on the 14th floor, shared photos of a pigeon family nesting in the towel and explained how it all started.

She first noticed an adult pigeon and its nest on March 13. 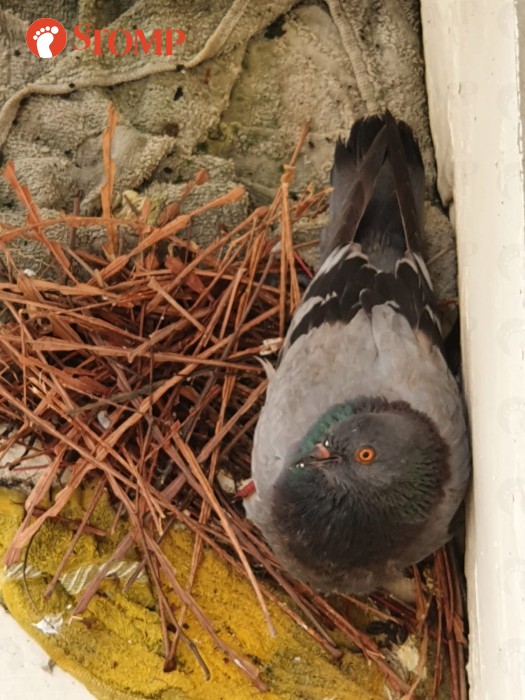 Rose recounted: "That day, I was about to hang a towel outside my kitchen window when I accidentally dropped a clothes peg.

"I looked down and saw a pigeon and two eggs.

"OMG! When did the pigeon lay the eggs?"

Rose said that she had dropped a bath towel on her window ledge a few months ago, but did not pick it up as it was too difficult to do so.

"I would need a long pole. Even my mop was not long enough to reach the towel so I left it there. I never expected the pigeon would stay there," she added.

On March 31, Rose took another look at the nest. This time, she saw only the pigeon but there was no sight of the eggs.

She told Stomp: "I was wondering what happened to the two eggs.

Rose continued her observations and said: "Most of the time, the mother pigeon is always there and she would hide the baby pigeons under her.

"At first, I thought the mother would never leave her babies to look for food because she was scared that they would fall if she left them.

"But I was wrong. When I was hanging my clothes yesterday morning (April 7), I noticed that the mother was not around. Perhaps she went to look for food."

Rose, however, hopes that the family of pigeons would not be making the window ledge their permanent home.

She said: "I regret not picking up the towel. Because of the towel, the pigeon got so comfortable that it built a nest there. It's actually very dirty on the ledge.

"The nest is also surrounded by pigeon droppings and I am scared to hang my clothes."