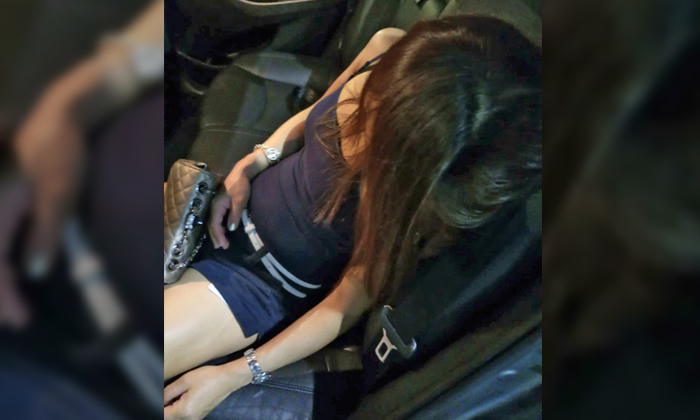 Thinking that a female passenger had died in his car, a frightened private-hire vehicle (PHV) driver called the police and an ambulance.

However, it turned out that the woman was simply dead drunk.

The incident occurred at a carpark near Block 109 Commonwealth Crescent on Sunday (Feb 24), at around 3.30am.

A friend of the PHV driver, Jack, told Shin Min Daily News that the driver had picked up the 27-year-old woman in Telok Kurau.

The woman, who reeked of alcohol and was unsteady on her feet, gave Block 109 Commonwealth Crescent as her destination.

Jack said: "Upon arriving, the driver tried waking the woman but she did not respond.

"Noticing an umbrella in his car, he used it to lightly tap the woman in hopes of waking her.

"However, she remained still even after 15 minutes."

Further attempts to rouse the woman were futile.

"My friend was scared and thought she had died in his car," added Jack.

"He called the police and the Singapore Civil Defence Force."

Paramedics arrived at the scene and successfully woke the woman up.

She returned to her unit safe and sound.

The driver, who called Jack and told him about the incident afterwards, was so troubled by what happened that he could not sleep for the whole night.

Related Stories
Cabby allegedly sends 64-year-old passenger to police station after dispute arising from bad joke
Passenger accuses Gojek driver of kidnapping her after she refuses to pay for ERP
Who's right, who's wrong? Cabby and passenger argue over whose route to take for flat fare ride
More About:
passenger
funny
police
sleeping
drunk