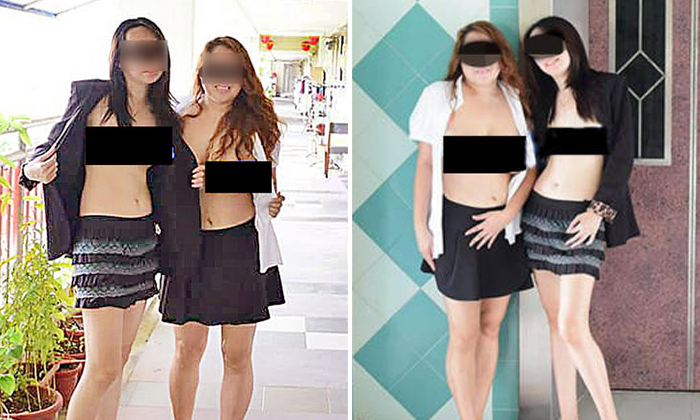 Photos of two women posing with their breasts exposed in public have sparked outrage online.

It is unclear when and where exactly the photos were taken.

According to Shin Min Daily News, a netizen had come across the photos online and re-uploaded them onto Facebook on Friday (June 14), where they soon went viral.

In the photos, the women can be seen posing outside the lift and along the common corridor of a Housing Board (HDB) block.

The women, who were dressed in skirts and heels, had their tops unbuttoned to expose their breasts.

A reflection in the picture of the women at the lift lobby appears to show someone helping them to take the photo.

Many netizens slammed the women's behaviour and said it would be a bad influence on children who came across the lewd images.

One said: "They can do anything they want, but they should not be doing it in public places."

This is not the first time women have been seen posing in various stages of undress in public.

The trend appears to have started as early as 2016.

In September 2018, lewd pictures of a woman posing at corridors and stairwells of HDB blocks started circulating online. A lawyer that Shin Min spoke to then said that the woman might have flouted the Miscellaneous Offences (Public Order and Nuisance) Act.