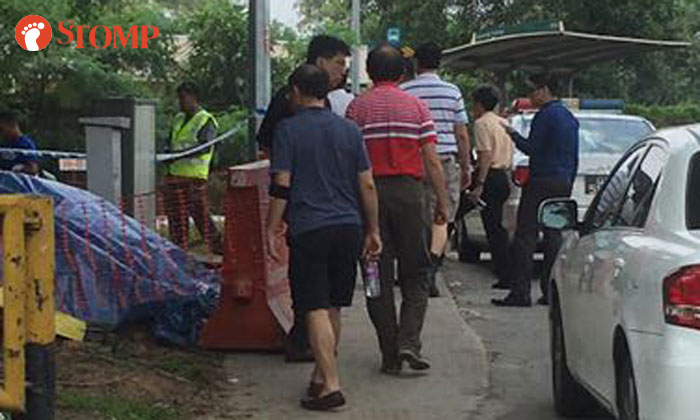 A Singaporean worker died after he was injured while carrying out cable works at an SP Group worksite at Kranji Loop yesterday (Sep 24).

Stomper Lynnda shared photos and videos from the scene of the incident with Stomp.

According to Lynnda, the man was licenced jointer, Mr John Asogan.

"He was electrocuted to death when he was doing termination work at Kranji/Sungei Kadut area," she said.

In response to Stomp media queries, a Singapore Civil Defence Force (SCDF) said that they were alerted to the incident at around 11.30am and dispatched an ambulance and a fire bike to the scene.

The worker was then taken to Khoo Teck Puat Hospital (KTPH) which was on standby to receive him.

A police spokesman informed Stomp that the 59-year-old man was unconscious when conveyed to KTPH where he subsequently succumbed to his injuries.

Stomp understands that the worker was believed to have been electrocuted.

SP Group issued a media statement on Sunday night saying the man had been injured while carrying out cable jointing at the worksite.

"We are saddened that the worker died and extend our deepest condolences to his family," SP Group said.

"The Singaporean worker was a sub-contractor of James Contractor - the construction company SP Group appointed to carry out cable works there. We are working closely with James Contractor to assist the family of the worker."

SP Group has halted work at the site and is investigating the cause of the incident.

Stomp has combined three videos shared by Lynnda into one below.