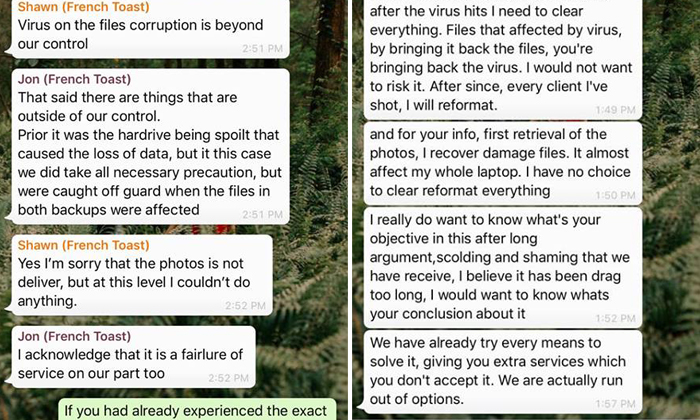 Imagine having your biggest night or going through one of the most significant milestones in your life and having close to no photos to show for it.

That was what happened to Facebook user Domenica Tan and her husband, who flew family and friends from far and wide to their wedding banquet, only for the photography company that they had hired to lose "majority" of the day's photos.

And this was only one of several hiccups that the couple had with French Toast Productions, according to Domenica's Facebook post on Feb 15.

In her now viral post, Domenica ​acknowledged that there were "successfully delivered photographs that were decent, but even these could not make up for the team’s repeated mistakes and poor attitude towards us."

It went further downhill from there.

Domenica also wrote: "We were appalled by Shawn's bad service recovery and rude replies. We even tried many ways to ask if he would seek professional help to assist with retrieving the lost photographs, but he had seemed to stop trying.

"Despite our repeated asking for further possible solutions, we were flatly told that nothing could be done to recover the images and that the software he had used didn't work.

"This just left us with more frustration and exasperation, especially since Shawn's service attitude has been very unsatisfactory, with many of his replies very curt and insincere."

And French Toast Productions' idea of compensation? A complimentary baby photo shoot, which Domenica said was "a gross assumption of what married life is."

"We have already tried every means to solve it, giving you extra services which you don't accept. We have actually run out of options."

In a Facebook post on the same night, French Toast Productions apologised "in view of the recent feedback" from the couple and said it was in touch with them "to resolve the matter in the best way."

"We recognise the failure on our part and deeply regret that we could have handled this better. We truly believe in what we do and still aspire to meet our commitments ahead for all the couples who have signed with us," it added.

"We are devastated that things have come to this juncture and are trying our best to improve the situation.

"This is a matter of utmost importance to the company and we recognise the matters which we should improve on. Rest assured that we will work on improving our processes and service quality to ensure this does not happen again."

In its post, French Toast Productions also said they "realise that a fuller explanation is due and are working on it asap."

When contacted by Stomp, Domenica's husband confirmed that the photography company had gotten in touch with them over the weekend.

He told Stomp: "We have discussed a refund and they are going to try retrieving the photos by the end of the month.

"If they still can't deliver, then we will have to consider other options including compensation or going to the Consumer Association of Singapore (CASE)."