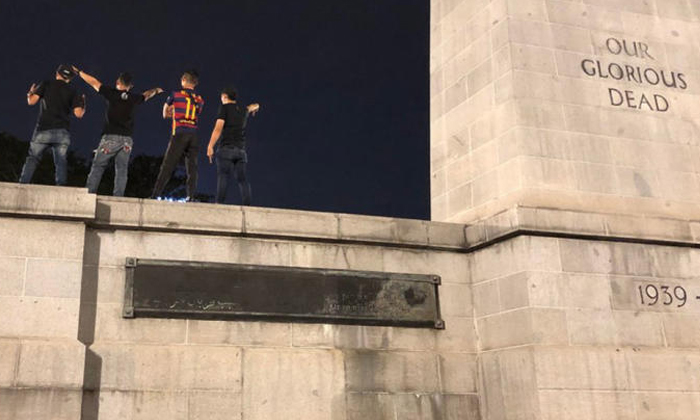 A photo circulating online of people striking poses on a war memorial have drawn flak from netizens.

The photo, which was uploaded last Monday, showed four young men striking different poses on top of The Cenotaph, in Esplanade Park.

One of them is believed to have even made a rude gesture.

The Cenotaph was built in 1920 and extended in 1950 to honour soldiers who died in World Wars I and II.

It was gazetted as a national monument in 2010.

Many netizens had said that the young men were being disrespectful, calling what they did immature and in bad taste.

The National Heritage Board (NHB) said members of the public should accord due respect at war memorials, which are spaces for contemplation and reflection.

An NHB spokesman told The New Paper: "We hope that every Singaporean who visits any National Monument will be aware of and respect the significance of these historic landmarks. This means responding in an appropriate and sensitive manner.

"We believe most Singaporeans and visitors are aware of the social norms in visiting historic or religious spaces, and we are optimistic that most visitors will be mindful of their behaviour."

When TNP visited the Esplanade Park and War Memorial Park, there were no signs telling visitors if climbing on the monuments was allowed.

Mr Simon Loi, 21, an undergraduate from the National University of Singapore, said: "This is just plain insensitive and disrespectful. Even if they claimed that they did not know about the significance of the monument, wouldn't the words 'Our Glorious Dead' send a hint?"

But some felt that the men did not do it out of contempt.

Civil servant Jane Tan, 24, said: "I think they likely did it to have fun and probably saw the monument as just another part of their surroundings, and not really something significant.

"Regardless of their intentions, this incident does reveal that there is a lack of understanding about the role that heritage sites and monuments play in Singapore, and how members of the public should constructively engage with them."

In 2013, a security guard who vandalised The Cenotaph was jailed.

In other parts of the world, tourists have also been banned from sacred and cultural sites after authorities deemed their acts inappropriate.

Related Stories
Scooter riders perform stunts and climb parapet at The Cenotaph, treating it like a "skate park"
Tourist destroys 18th century statue by taking a selfie in a museum in Lisbon, Portugal
3 Chinese tourists apologise after being shamed for trashing Japanese Airbnb
More About:
Youths behaving badly
controversy
inappropriate