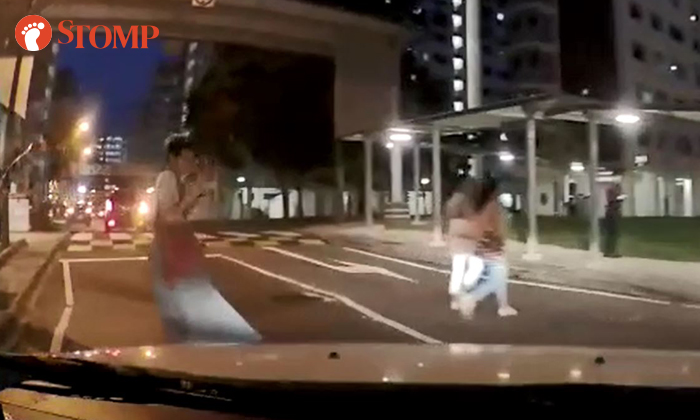 Several pedestrians were caught on camera jaywalking at Simei Street 5 at around 7.13pm on Oct 16.

One pedestrian can also be seen using her mobile phone while jaywalking and was startled when Stomper M's car stopped to let her cross.

All this is despite the fact that a zebra crossing is located a few steps away from where they were crossing.

The Stomper, who submitted a video of the incident to Stomp, says that this is an everyday occurrence.

In fact, it was previously reported on Stomp that on the same day that morning, multiple pedestrians were also seen jaywalking.

In a telephone interview with Stomp, he elaborated, "The woman that was crossing... She did not look left or right. (These pedestrians) assume that other motorists must immediately stop for that even though they are jaywalking. Just use the zebra crossing!"

He also told Stomp that there was an accident which happened there recently about 2-3 months ago.

"I hope someone will actually do something about this. Maybe even set up a barricade."

Related Stories
Why jaywalk and nearly get hit by car when the zebra crossing is just seconds away?
Man behaves like hooligan, taunts driver after getting honked at for jaywalking in Bedok
Woman dashes in front of vehicle just as driver was about to accelerate
More About:
jaywalking
dangerous
Simei