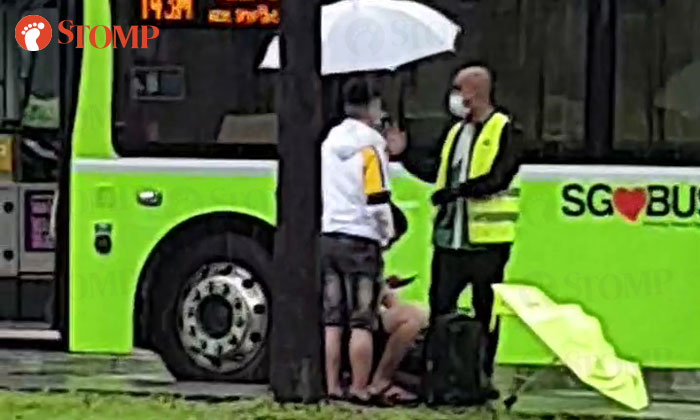 A 28-year-old man was taken to hospital after he was involved in an accident with a bus at the junction of Jurong East Central and Jurong Gateway Road on Sunday morning (June 21).

The Tower Transit bus captain has been suspended while investigations are ongoing.

A Stomper alerted Stomp to the incident and shared photos and videos he took as he was passing by the scene.

In the footage, the driver and another man are seen attending to a man sitting on the side of the road during a downpour.

In response to a Stomp query, the police said they were alerted to the accident at 8.20am.

"The pedestrian, a 28-year-old male, was conscious when conveyed to Ng Teng Fong General Hospital," a police spokesman said.

A spokesman from Tower Transit told Stomp in a statement: "Tower Transit Singapore has been in touch with the pedestrian, who is recuperating at home, to express our apologies and to wish him a speedy recovery.

"The Bus Captain involved in the incident has been suspended while an investigation is ongoing."