Pedestrian argues with driver at Claymore Road: "Don't be a d**k" 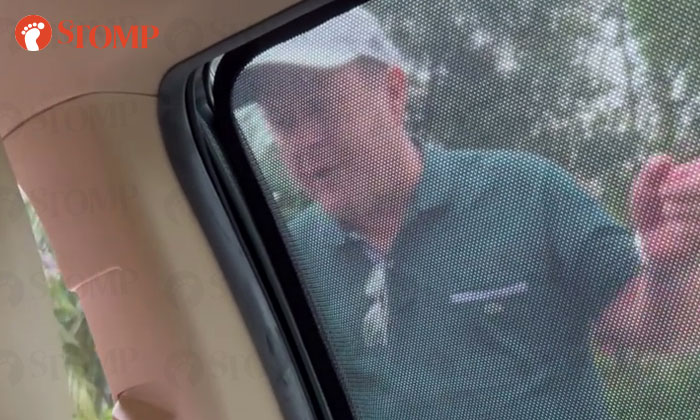 A pedestrian confronted a car driver after allegedly refusing to move out of the way near Claymore Road on Friday (Apr 8) at about 6.20pm.

Stomper Elaine posted a video of the confrontation on her Facebook which has since garnered over 18,000 views.

She said the man was walking in the middle of the driveway from Claymore Connect towards Orchard Hotel's main lobby when her dad, who was driving, told him to move to one side so he could pass by.

"He purposely walked even slower and stared us down," she said.

"When we were stopped at the traffic light, he came and confront[ed] my dad saying my dad doesn't know the road laws and that it was a pedestrian walk (It wasn't) and called my dad a d**k!"

This fat ass was walking in the middle of the car slope driveway turning into the driveway of the hotel lobby and my dad told him to move to one side so that he could drive by. He purposely walked even slower and stared us down. When we were stopped at the traffic light, he came and confront my dad saying my dad doesn’t know the road laws and that it was a pedestrian walk (it wasnt) and called my dad a dick! He clearly preyed on my older father whom he thinks he can bully and harass. I had my baby on me too. So obviously he knew we were an easy target for bullying. Such behavior should not be tolerated. Please share. Mothership.sg Stomp ROADS.sg SG Road VigilanteSG Road Vigilante - SGRV

In the video, Elaine's father tells him to 'follow Singapore law' to which the man said he is and tells him, "Don't be a d**k".

He then mocks the older man before walking off.

"My dad was obviously very displeased because the guy was clearly obstructing the driveway and he still insisted it was a pedestrian walkway," Elaine told Stomp.

"I understand sometimes people walk there because it's quicker to walk outside than inside the mall but it isn't a pedestrian walkway.

"Also, it wouldn't have been an issue if he kept to the side."

She added: "For me, I'm not about stoking the anti-foreigner sentiment.

"It is truly a case about bullying and being unreasonable.

"He was clearly confrontational, and it was very obvious that he was bullying my elderly father."

Related Stories
Cyclist argues with pedestrian who did not give way to him along footpath: 'You got no balls?"
2 couples exit cars to argue at Clementi carpark
Merc driver unleashes string of profanities on deliveryman, but there's more to the story
More About:
dispute
pedestrian
driver
argument
rude
bully