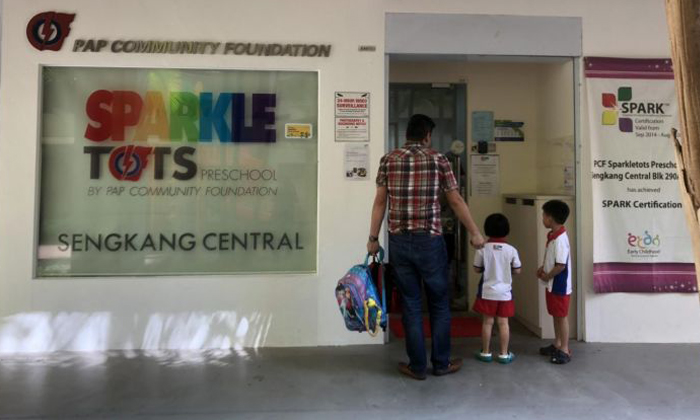 Children from three more PCF Sparkletots pre-schools have displayed symptoms of food poisoning, a PCF spokesman said on Thursday (March 28), just one day after the authorities announced they were investigating an outbreak of gastroenteritis at four other centres.

The Ministry of Health also announced that, as of 4pm on Wednesday, the number of reported cases had risen to 184, up from 109 previously.

Nine of the cases are in hospital, in stable condition.

On Thursday, the PCF spokesman said that children at two other centres located at Blocks 262A and 208 Sengkang Central, as well as the PCF Sparkletots pre-school at Punggol North, have displayed symptoms of food poisoning.

This brings the total number of centres with affected children to seven.

The spokesman said that PCF is in close contact with the parents of affected children, and is monitoring their children’s condition.

PCF will continue to provide the relevant support for all affected parties, he added.

On Wednesday, the pre-school operator said a total of 11 centres, including the seven affected, were served by Kate’s Catering.

PCF is continuing to monitor the situation in the four other centres, and is assisting the authorities with the investigation.

It also suspended the caterer’s services at all 11 centres for an indefinite period of time, and arranged for meals to be provided by a certified in-house cook for the time being.

The authorities were notified of the first cluster of cases last Friday, and conducted an inspection of the caterer’s premises on the same day.

On Monday, additional clusters of cases were reported, prompting the National Environment Agency (NEA) to instruct Kate’s Catering to suspend its operations with effect from Tuesday, pending investigations by the Agri-Food & Veterinary Authority of Singapore (AVA), MOH and NEA.

As part of the investigations, food handlers were sent for stool screening, and food and environmental samples were taken for testing.

When contacted by ST, a spokesman for Kate’s Catering said it was working with the respective authorities.

The Early Childhood Development Agency (ECDA) also said it was working with the authorities to investigate the outbreak of gastroenteritis at the pre-schools.

“ECDA has also stepped up health and hygiene checks during routine visits to centres where they are advised on food hygiene practices and infection control measures,” the agency said.