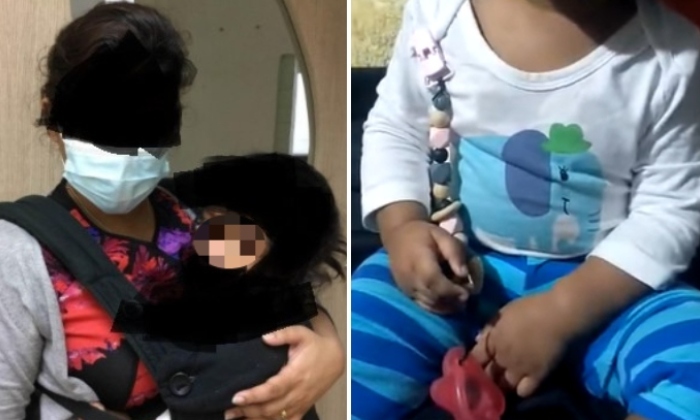 The PAP Community Foundation (PCF) has apologised after a 16-month-old toddler was found to have sustained a dislocated elbow at the PCF Sparkletots preschool in Woodlands.

The incident, which occurred on October 8, caught the attention of the public after Mirielle Inman, the toddler's mother, shared about what happened on Facebook.

Our 16 month old daughter was abused by the 2 educarers in PCF infant care Sparkletots on 8 October 2020. We are...

In the post dated January 12, Mirielle shared that her daughter, AK, was "abused" by two educators at PCF Sparkletots.

She said that when she went to pick AK from preschool at 6.30pm that day, she noticed that AK could not stop crying.

She assumed that AK was just "cranky" due to lack of sleep, was in an awkward sleeping position during her nap, or possibly because she was hungry, adding that she "never once doubted the teachers". 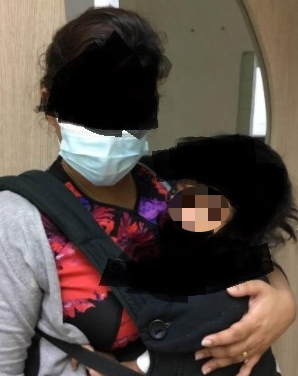 When Mirielle discovered that AK's left hand was constantly "curled up", she called the preschool teacher to ask whether anything had happened to AK at school, to which the teacher denied.

AK was subsequently sent to National University Hospital (NUH) and the doctor who attended to her said that "a normal pull would not have caused this".

According to Mirielle, the doctor also mentioned that a "brute amount of force" was required to "dislocate a child's elbow" and that such incidents "do not happen easily".

When Mirielle returned to PCF Sparkletots the next day, she asked to see the CCTV of the previous day's events. She added that this was when she found out that AK's elbow was dislocated as a teacher had "pulled her elbow while waking her up from her sleep". 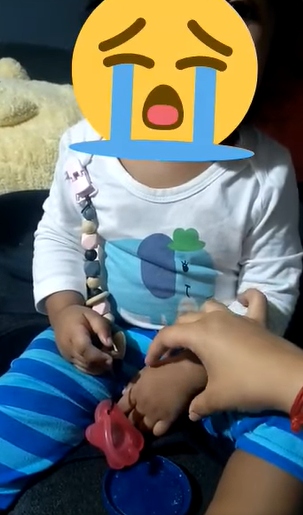 (Screengrab from a video that Mirielle shared on Facebook, showing AK's inability to move her left arm)

In a second Facebook post, Mirielle shared that she had informed PCF Sparkletots and the Early Childhood Development Agency (ECDA) about the case but was upset that there was no "progress" on the investigations.

"PCF Sparkletots and ECDA went all silent on our child's abuse case for over two months and we had to email them multiple times on the progress of the case," Mirielle wrote.

"In fact, this has been raised up to their CEO and board of directors. We have tried all avenues such as PCF HQ, ECDA and our MP in Sembawang GRC to seek help on our child's abuse case in a civil manner, but no one was willing to come forward to assist us. Hence, we have decided to speak up and seek justice for our daughter.

"Initially we thought of filing for a lawsuit, we have met up with multiple lawyers and their fees are beyond our affordability. After much consideration, we feel going public is the right option for us."

In response to a Stomp query, Ms Tan Lee Jee, Assistant Chief Executive Officer at PCF, said: "PCF takes this incident very seriously. The safety of all children in our centres is our top priority. An internal investigation by PCF and an independent investigation by the ECDA were conducted."

Ms Tan added that the investigations concluded that the child had likely sustained her injury, (a pulled elbow) due to inappropriate handling by the infant educator.

"We are very sorry, and deeply regret this. The educators involved are also deeply apologetic," said Ms Tan.

"ECDA has penalised PCF and the two employees involved were suspended. They are now undergoing a fundamental review to assess their suitability to work in this field. Further disciplinary action may be taken against them if they fail to meet the expected standards.

"The parents have decided that their child should remain in the same centre with us. We thank them for their trust and will continue to support the child in her learning and development.

"The parents of the child have filed a police report and we will fully cooperate with the authorities on the investigations."

An ECDA spokesman also responded to queries about the incident and said: "The safety and well-being of children in preschools is of utmost importance. We take a serious view towards any case of child mismanagement and follow up on every alleged child mismanagement incident."

The spokesman explained that investigations into such allegations generally require time as they involve unannounced visits to the centre, interviews with staff, review of CCTV footage and of the preschool’s processes and records, assessment of the investigation findings and actions to be taken, if necessary.

The spokesman added that actions will be taken if findings support the allegation and that preschool operators are also reminded through regular briefings and circulars to ensure vigilant supervision of children, and to provide guidance and support to teachers on classroom management.

"ECDA is aware of this case. The child’s parent had informed ECDA in mid October 2020 that her child had sustained a dislocated elbow at the preschool on October 8 arising from staff abusing her child. ECDA followed up with the parent on October 12 and informed her that we would be conducting an investigation," said the spokesman.

"Our investigations took into account the information provided by the parent to ECDA, as well as our unannounced visit to the centre and assessment of the preschool’s physical environment and standard operating procedures, CCTV footage and interviews with relevant staff.

"Our investigations found that the child’s injury on October 8 was likely caused by a member of the preschool staff, who had pulled the child by her hand into a standing position when waking her up from her nap. We had assessed that the staff’s overall actions were inappropriate but not ill-intended to harm the child.

"In addition, we found that a second member of the staff had handled the child in an inappropriate manner to prepare the child for her milk feed but this did not cause the child’s injury. In both instances, we found the actions by the two staff to be inappropriate but not intended to cause harm to the child."

ECDA explained that they have taken action against the preschool licensee and both staff members who were involved.

"In accordance with our regulatory framework, this took into consideration the facts and circumstances of the case including whether there was intent and the nature of the injury," added the spokesman.

The spokesman explained that Mirielle was informed of ECDA’s investigation outcome on December 14.

"The child’s mother has since raised further concerns regarding PCF Sparkletots’ principals arising from the incident. ECDA is looking further into these additional concerns raised," said the spokesman.

With regards to this incident, the police confirmed a report was lodged in October 2020.

"Investigations have commenced following the report. The police have also been updating the victim’s parents on the progress of the investigation with the most recent update in December 2020," said the police in response to Stomp queries.