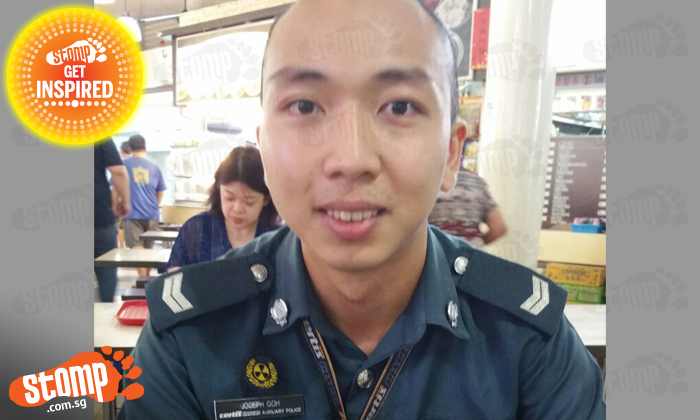 A man choked on his food at Joo Seng food court yesterday evening (Sep 25), but was thankfully saved by a quick-thinking Certis Cisco officer.

Stomper Angela, who had been getting dinner with her fellow church members, had witnessed the entire incident and identified the officer as Joseph Goh.

She recounted what happened in a phone interview with Stomp:

"The officer had been queuing to buy food when we suddenly heard screaming and a loud commotion.

"A man who looked to be in his 50s or 60s was sitting up and had choked on his food. His face was all red and his female companion was panicking.

"The officer then ran towards the man and very quickly performed cardiopulmonary resuscitation (CPR) on him. He saved the guy in five to seven minutes."

Angela said that the patrons at the food court broke out into applause after the officer's heroic act. Many people, including herself, went up to congratulate and commend him for a job well done.

"I took his photo and asked if he was okay if I sent it to Stomp. At first, he was a bit apprehensive, but I told him that such acts should be recognised and appreciated."

Angela has also lauded the officer's heroic act on Facebook.

A friend of hers, Isaac, who witnessed the incident as well, hopes that Joseph's superiors will come to know of what happened and reward him accoridngly.

Related Stories
Watch chilling SCDF rescue of elderly man who fell out of window of Tampines Block 410
Drama at East Coast Park as Police Coast Guard rescue teenager and elderly man from sea
Late night drama as workers get stuck in gondola at Block 327 Jurong East
Chinese locals use ropes and nets to save soldier from being swept away by floodwaters
More About:
heartwarming
inspiring
rescue