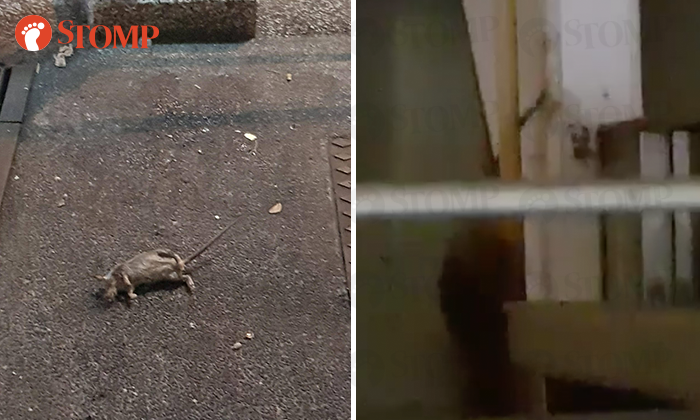 The sight of rats roaming freely at a hawker centre can ruin anyone’s appetite, but for a stall owner, this can spell a disaster.

Stomper Alfi, who runs a stall in a hawker centre at Block 261 Bedok North Street 1, has seen a recurring rat infestation over the past few months.

According to Alfi, he first noticed a rat caught in a trap near the food stalls on June 29.

On Aug 7, he noticed the carcass of a dead rat on the pavement.

The vermin seemed to keep surfacing.

On Oct 5, he managed to take a video of a brazen rat sneaking into a stall after operating hours.

“I first noticed them when I was preparing ingredients at night for the next day.

"It's been happening for a while, and the problem seems quite persistent.

"There would be three or four of them running around at night.

"You can see droppings on the pipes and rooftop.

"I used to be in pest control so I can understand the danger of these pests.

"Just a single dropping can poison an entire pot of soup.

"Hope the authorities can do something about this."

Alfi himself has taken precautionary steps to prevent the rodents from invading his stall.

"I keep my stall clean so they won't be tempted.

"I also installed a glue trap, but so far, I've not caught anything."

Related Stories
Huge rat scaling rubbish bin at Mei Ling Street is determined to get some food
Woman joined by army of cockroaches, rats and centipedes at Thai market -- but keeps on eating
Boon Lay HDB resident catches rat after it invades his dining hall and kitchen
More About:
rats
hawker centre
hygiene