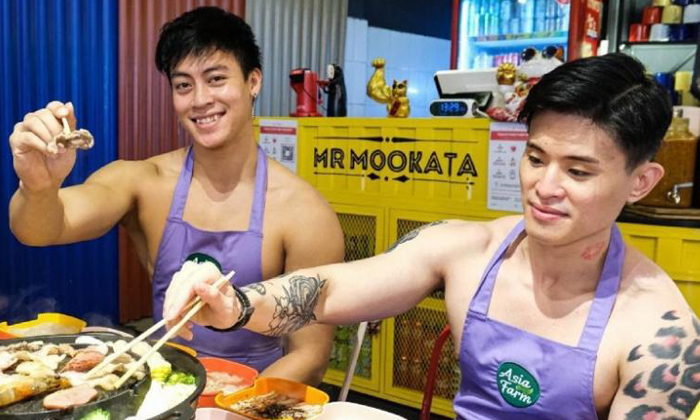 The marketing gimmick of enlisting shirtless hunks to serve drinks to its customers was meant to draw crowds.

But Mr Mookata got more than they bargained for when the police showed up at its premises in Bugis on Saturday (Jan 8) night.

But two hours into the dinner service, a police report was lodged “due to the presence of half-naked men wandering around”, reported Chinese newspaper Shin Min Daily News.

The restaurant owners told Shin Min the police left after some questioning and without taking any action.

An Asia Farm spokesperson later explained that the image of bare-bodied, strong men was to emphasise health, and the move was to promote the firm's healthy and low-sugar drinks.

But for those who missed out on the “thirst-quenching”, worry not. The hunks will be back this Saturday on Jan 15, the eatery shared in a Facebook post on Friday (Jan 7).

Let’s just hope no one raises a fire alarm this time.