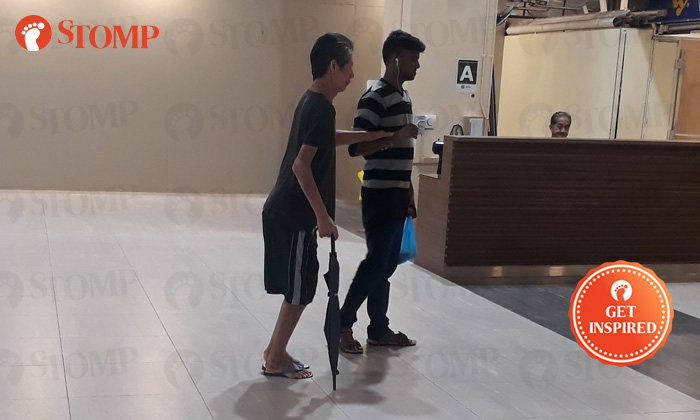 If you have 15 minutes to spare, what would you do with it?

Well, a man decided to use 15 minutes of his time to help an elderly man who has difficulty walking to get from one point of Elias Mall to another.

Stomper Siska, who happened to be sitting nearby as she waited for her mum, witnessed this heartwarming scene that happened at around 7.30pm on July 31.

In photos and a video shared by Siska, a man in a striped T-shirt is seen lending a helping hand (literally) to an older man who was walking with the help of an umbrella.

Siska told Stomp that she believes that the helpful man is a construction worker.

She said: "It seemed like he was on his break as he was holding a plastic bag containing what looked like his food in his left hand.

Siska also said that the two had taken about 15 minutes to get from point to point.

"The elderly man seemed to have difficulty walking, he was limping and was walking very slowly. The way he walked also reminded me of my grandmother, who also has problems walking.

"What really shocked me was the patience and selflessness that the construction worker had as he took his time to help a complete stranger. I myself didn't know the elderly man needed help until I saw the worker approaching and helping him, and I also didn't know how to help anyway.

"I really hope that Singaporeans can appreciate and respect construction workers more as they are also humans. They deserve care and respect just like everyone else."