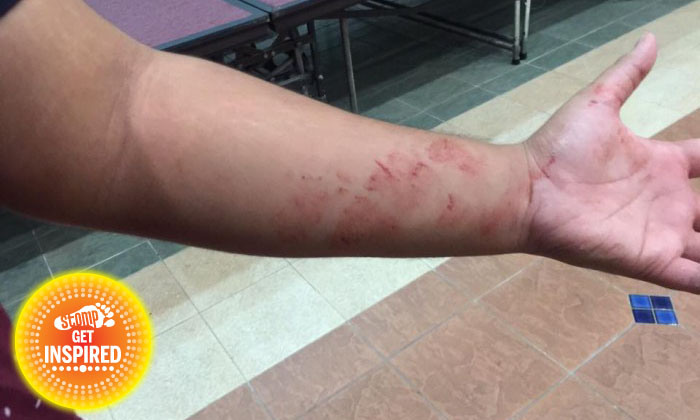 If the recent posts about racism encountered in Singapore has brought you down, this will lift your spirits again.

A Facebook post by Khairul Farhan recounted a heartwarming incident on Jul 21, at about 7.30pm near Pasir Ris Elias Community Club.

He wrote, "What happened last night reaffirmed my beliefs that RACIAL HARMONY is still strong in Singapore!"

Khairul and his wife saw an old man fell off his bike, and he was bleeding.

"I yelled to my wife to call the ambulance while I dug my bag for a shirt. I immediately applied pressure on his head where he was bleeding from.

"He was shivering and muttering. I continued applying pressure and carried him up to sit at the ledge. At that point of time all I could think of is to stop his bleeding as it has already went down to his shirt."

What happened next warmed his heart.

"Out of nowhere, a few passers-by came by to help.

"1) a Chinese woman shielded the old man with an umbrella while asking the old man for his family member's contact.

"Like what it seems to be forever, the ambulance finally came. Bringing the old man and his grandson to the hospital.

"I don't even know the names of the people who helped me last night but I was truly touched and moved by the unconditional help by our fellow Singaporeans (and Foreign help!!)

"What gave me hope that the uncle can make it was that he was even asking for his bicycle when he was being put on the ambulance."