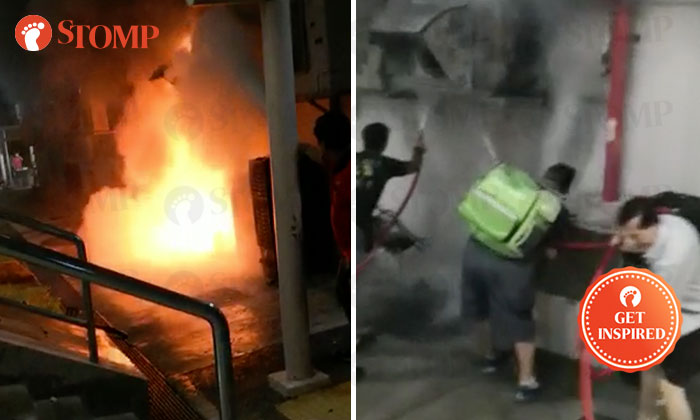 An air-conditioner compressor behind a shop at Block 86 Redhill Close caught fire at around 11pm on Wednesday (June 27), but was put out with help from members of the public.

Stomper S was passing by the area when she witnessed the incident.

“An employee from a supermarket tried to put out the fire with an extinguisher but the fire was just too big.

“Luckily, three or four passers-by came to help. They used the hose reels from the 2nd and 3rd stories of the multi-storey carpark nearby.

“They threw the hoses down and then managed to put out the fire.”

According to Sofia, the fire was put out within five minutes.

In response to a Stomp query, a Singapore Civil Defence Force spokesman said:

“The fire involved the compressor of an air-conditioning unit at a first-storey unit and was extinguished by members of the public with a hose reel prior to the SCDF’s arrival.

“No injuries were reported.”

The police said that it was alerted to a case of mischief by fire.

A report was lodged and investigations are ongoing.

Stomp understands that a 13-year-old youth is assisting the police with investigations.