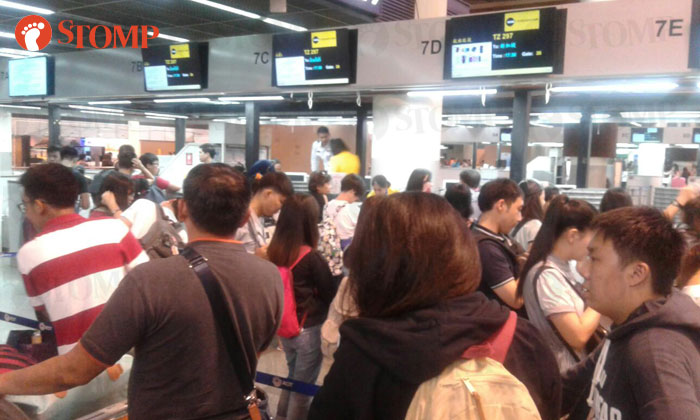 Passengers were left angry and frustrated after they had to wait nearly a day for their flight from Bangkok to Singapore after Scoot flight TZ297 had been cancelled due to an issue with the aircraft's air-conditioning and pressurisation system.

A Stomper was one of those who were supposed to be on the 10.55pm flight home on Jun 30.

Instead, it was complete "chaos".

The Stomper listed out what Scoot got right following the flight cancellation.

"We had a six-hour hotel stay where we were allowed to shower, have a quick nap and a buffet lunch before heading back to the airport at 1pm.

"We also received fast food vouchers when we arrived back at the airport on Jul 1."

However, the Stomper said that the vouchers would have been better utilised if they had been issued the previous evening as they waited six hours for their hotel transfers at 5am from 10.55pm.

Things just got more ugly from there, said the Stomper.

"The Scoot staff seemed untrained in dealing with this kind of situation.

"They scooted us to a hotel but we were not entitled to breakfast unless we paid $15.

"After being scooted back to the airport at 1.30pm, we were left waiting at closed counters for an hour before the staff finally opened them."

The passengers were then supposed to board the plane at 5pm.

"The plane was ready but the check-in staff told us that there would be a delay until 6.30pm because the captain and flight crew had not arrived at the airport. Ludicrous!"

The Stomper and fellow passengers continued to wait till 8pm and still there was no sign of the flight crew.

"Even the Don Mueang Airport officer came down to confirm that the Scoot plane had been prepared and ready for the 5pm flight but they cannot locate the Scoot captain and crew.

"He said it's very unprofessional for the Captain to not even present himself to speak to passengers, leaving all ground communication to the clueless Nok crew that is supposedly representing Scoot!

Unsurprisingly, the incident has robbed the Stomper of all confidence in the airline.