Passengers pull down masks to eat ice cream, taunt bus captain: 'Drive carefully can or not?' 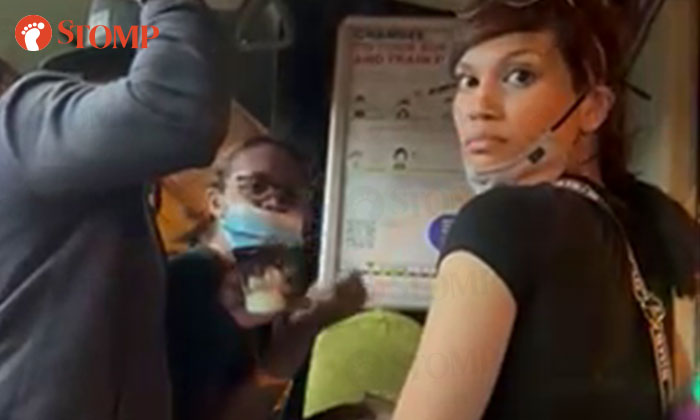 A group of people were caught on video taunting a bus driver.

Stomper Morpheus said that the man, two women and a toddler in a stroller boarded bus service 72 from Tampines Interchange on Feb 1 at about 9.35pm.

"They started verbally abusing the driver, removing their masks to talk loudly while eating their ice cream," he said.

"They let their toddler press the stop button repeatedly and caused an unnecessary stop at the first bus stop.

"The driver asked them nicely not to do that but they hurled abusive words at him and even said the male driver was having menses."

In the video, one of the women is seen with her mask pulled down. She shouts over at the driver: "Shut up la you, never talk to you la! Drive carefully can or not?"

When one of them points out the Stomper is recording them, the other woman points at him and says: "Hypocrite take video."

"When they saw us taking a video, they turned and told us off," said the Stomper.

"They are such a public nuisance.

"As I had to alight at the second stop, I did not have time to tell them to stop being a nuisance.

"I hope the bus driver is alright."

Related Stories
Elderly man hurls vulgarities at bus driver for not stopping for him: 'Do you know who am I?'
Mum 'goes full Karen' on Scoot and SIA after flight cancelled due to Athens snowstorm
Motorcyclist flashes middle finger at driver despite his own reckless behaviour
More About:
Bus
rude
passenger
dispute
vulgar