Passengers on "futuristic trishaw" take selfies while riding around in Hougang 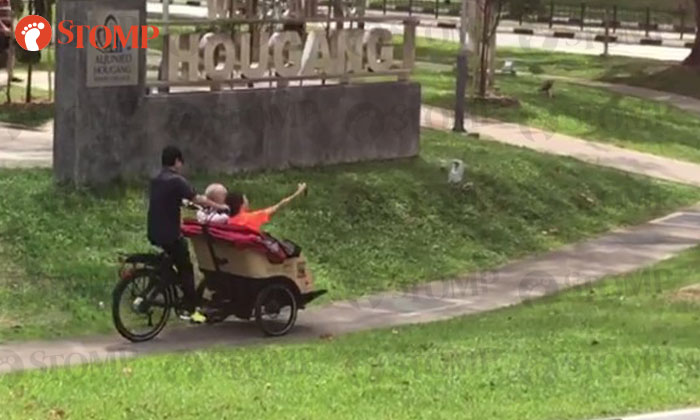 Stomper Lau Lup has managed to capture yet another interesting occurrence in Hougang on Dec 11 at about 1pm.

In previous reports by Stomp, he had caught sight of strange creatures, accidents and even local celebrity Patricia Mok.

In this incident, Lau Lup was on his way to work seated on the upper deck of bus service 147 when he spotted a couple taking photos while riding on a trishaw.

He found the incident amusing and captured a video of it, which he sent to Stomp.

He said: "Firstly the couple was casual and relaxed, treating Hougang like a tourist destination.

"They seemed to be taking selfies of themselves and the trishaw rider.

"The trishaw rider even waved to the camera."

He also found the design of the trishaw innovative.

Lau Lup, who is a resident of Hougang, said he had never seen a trishaw like the one in the video before.

He said: "Unlike the traditional trishaw that has the cyclist in front or at the side of the passenger seats, this trishaw had the cyclists ride behind the seats."

"It looked futuristic and modern, which is a great difference apart from the traditional trishaws I am used to seeing in Chinatown."

The Stomper, who has never ridden on a trishaw before, said that he would like to ride one when he has the opportunity to.

"I would like to ride on a trishaw with my wife and my son. It would be fun going around heritage sites in Singapore," he added.

Related Stories
You'll be amused to see what's hitching a ride on this car along Orchard Boulevard
Videos show why cyclist with 'extended modified attachment' is a safety hazard on the road
What does this man need with his "extended modified bike"?
More About:
unusual
Hougang