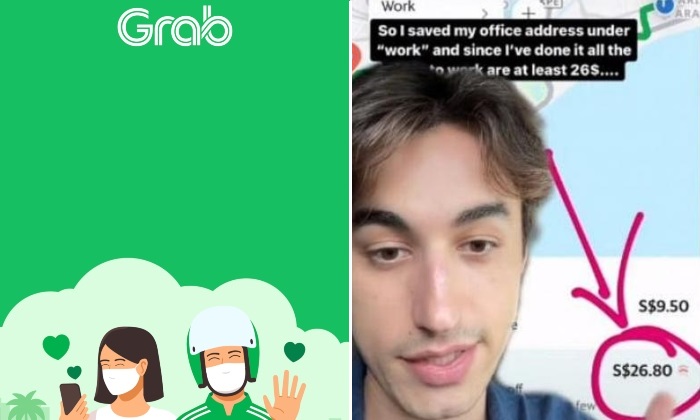 Grab on Friday (July 29) said it does not charge passengers higher fares for booking rides to locations they have saved on the app, after a post on video-sharing app TikTok claimed that manually keying in the same address of a saved location could save riders $5.

The ride-hailing firm told The Straits Times that its algorithm uses Geohash, a global standard for maps that splits places into very small zones, which means places that are next to each other could be located in different zones, resulting in different calculations of demand and supply. This in turn can lead to fare variations.

It is unclear if the passenger whose case was flagged by TikTok user mozzarellapapi had keyed in the exact same location as the one that she had saved.

"Our pricing algorithm divides Singapore into many small zones on the map following latitude and longitude lines, based on the global Geohash system," Grab said.

"Our system has largely been keeping the variance in fares small for pick-up points that are very near to each other. We will continue to keep working on ways to do so."

Grab, the largest ride-hailing player here, allows users to save their frequently visited places on the app under tags such as "Home" and "Work" so they do not have to repeatedly key them in.

Other ride-hailing apps such as Gojek also allow users to do the same.

The TikTok video, posted on Wednesday, had cited one case where a girl managed to save $5 after manually keying in her work address, as compared with when she tried to book a ride to a location she saved as "Work".

The video was subsequently liked by some 16,600 TikTok users and shared 4,017 times.

Many others commented that they also noticed a fare difference when they manually keyed in the addresses of their saved locations, although a significant proportion also said the method did not work for them.

Mozzarellapapi later cautioned his followers against jumping to conclusions.

He wrote on his post: "I'm sure there's a technical explanation for why this happens so please don't send hate to Grab. I just wanted to remind everyone to check their settings/options when booking to get the cheapest option."

The confusion comes after Grab drew criticism two weeks ago for reducing the grace period for riders to reach their booked cars before they incur a waiting fee from five minutes to three.

Grab has said it is refining its controls so that drivers cannot mark that they have arrived at the location unless they are very close to it. ST has asked the company for more details about this process.

Related Stories
2 men molested Grab driver, told him he was cute and 'God sent them to pleasure him'
Ex-Grab driver acquitted of trying to rape drunk passenger
Man thanks Grab driver who rushed him to hospital and saved his life
More About:
grab
TikTok
fare