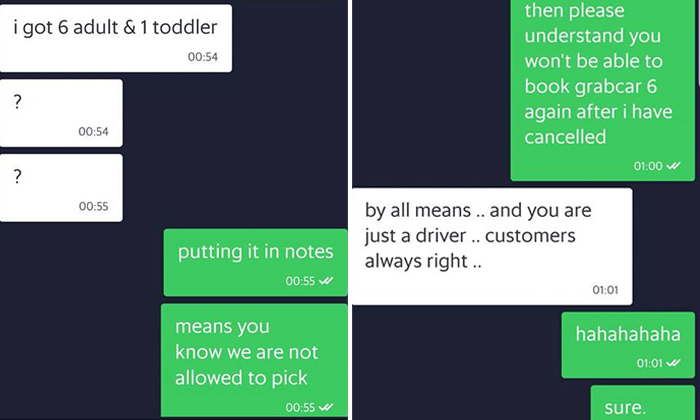 Ride-hailing firm Grab is investigating an incident involving a passenger who booked a regular six-seater GrabCar ride despite her group consisting of six adults and one toddler.

Facebook user Jae Kyomen posted screenshots of the two's conversation on June 6 and said the passenger was "too much".

The female passenger had booked a GrabCar 6 ride for $30 instead of a GrabFamily 6 ride, which would cost more.

She then left a note for the driver about how her group would be accompanied by a toddler.

Under the Road Traffic Act, it is illegal for cars to carry passengers under 1.35m tall without a booster seat or a child restraint.

The GrabFamily service uses vehicles equipped with booster seats and caters to children who are between 1m and 1.35m in height.

The driver told the passenger that leaving the note meant that she was aware of the implications, adding: "And you know the law. Why expect drivers to break the law for you?"

When asked to cancel the booking, the passenger refused and wrote: "Why not you cancel?"

The driver replied "no problem" and informed her that she would not be able to book a GrabCar 6 ride again after the cancellation.

However, she responded: "By all means. And you are just a driver. Customer's always right."

She also told him: "Know who you dealing with."

A Grab spokesman told Stomp on Wednesday (June 12): "We encourage both passengers and driver-partners to treat each other with respect and kindness before, during and after the ride.

"Our driver-partners’ welfare is important to us and we evaluate our passengers’ ratings on an ongoing basis. Passengers who have repeatedly displayed errant behaviour towards our driver-partners may be suspended from the platform.

"We are currently investigating the case."