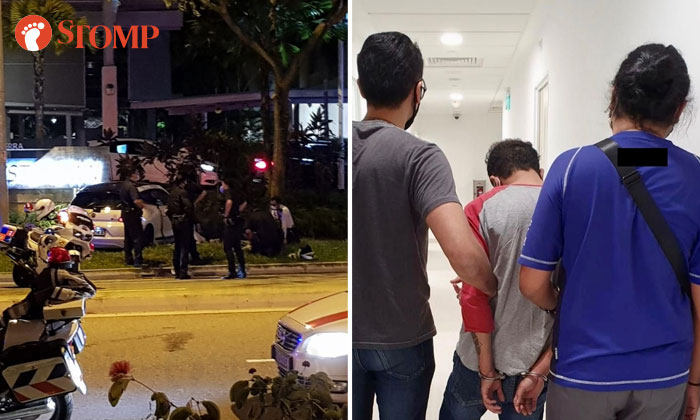 A Singaporean man who fled from a car involved in a high-speed chase last Saturday (Sept 12) morning has been arrested.

In a statement on Thursday, the Central Narcotics Bureau (CNB) said the man, 29, was arrested on Wednesday for suspected drug trafficking offences. The police are also investigating him for traffic-related offences.

In the same operation, the CNB also nabbed four other Singaporeans - comprising two men and two women aged between 25 and 34 - for suspected drug offences.

About 7g of methamphetamine, also known as Ice, was seized in raids conducted in multiple locations in Singapore.

The car chase, which took place at about 1.10am last Saturday, was caught on camera with the video shared widely.

Traffic police officers were patrolling along the Central Expressway towards Seletar Expressway, near Ang Mo Kio Avenue 1, when they came across a driver who was driving at a relatively slow speed on the extreme right lane.

In an earlier statement, the police said one of the officers then signalled to the driver to stop the car so that they could conduct a check, but he refused to stop and sped off.

A high-speed chase ensued before the car mounted a kerb in Canberra Street and crashed into a tree.

The 31-year-old male driver was arrested for dangerous driving, driving without a valid driving licence and suspected drug-related offences.

But his male passenger managed to get away.

The CNB said that its officers established the identity of the passenger after "extensive investigations".

Checks showed that he was picked up by a 34-year-old man in a van after he fled from the scene at Canberra Street.

The van driver was arrested on Tuesday in the vicinity of Corporation Walk for suspected drug offences.

In a follow-up operation that evening, CNB officers arrested a 31-year-old man and a 25-year-old woman in the vicinity of Ho Ching Road.

During a search in their residential unit, a packet containing about 1g of Ice was found, along with various drug paraphernalia, said the CNB.

It emerged that the 25-year-old female had purchased the packet of Ice from the male passenger about two weeks earlier.

On Wednesday afternoon, CNB officers raided the hideout of the 29-year-old man in the vicinity of Anchorvale Road.

They had to force their way in as he "refused to heed the lawful orders of the officers to open the door".

The CNB said the man also turned violent when officers moved in to arrest him.

A 31-year-old woman at the scene was also arrested for suspected drug activities. She had a four-month-old infant with her.

Officers found seven packets containing about 6g of Ice in total and various drug paraphernalia in the unit.

Preliminary investigations revealed that the woman had been abusing Ice during her pregnancy, said the CNB, which added that the infant is currently in the safe custody of a relative.