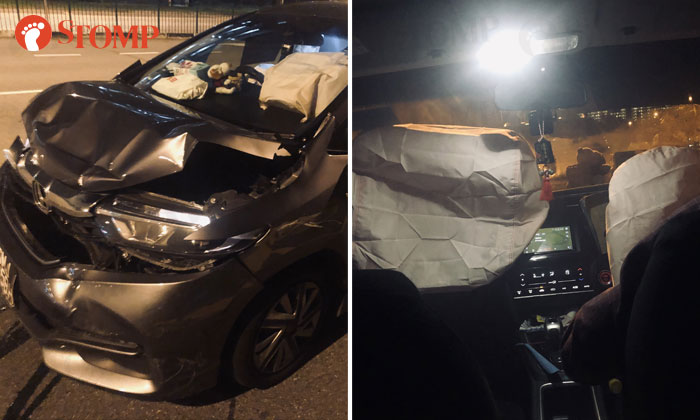 Stomper Inmotion suffered two fractured ribs and a knee injury after the Grab car he was travelling in hit another car along Clementi road towards West Coast Ferry Road last Sunday night (June 23).

He told Stomp that the Grab driver, a 63-year-old man, crashed into a car that was stationary at a traffic light ahead of him.

"From the photos, you can see the impact was big.

"Luckily, I was wearing a seatbelt."

In the photos, the airbags of a Honda have been deployed and the front of the vehicle is badly damaged.

In response to a Stomp query, the police said they were alerted to the accident at about 11.26pm.

A spokesman confirmed a 44-year-old male passenger was conscious when taken to National University Hospital (NUH).

Stomp understands the Grab driver and the other driver, a 24-year-old woman, were not taken to hospital.

Inmotion told Stomp that he was taken to the accident and emergency department (A&E) for a knee injury and was discharged the next morning.

He discovered two of his ribs were fractured when he went for a follow-up appointment on Tuesday (June 25).

"Why make things difficult for the victim?" he asked.

Responding to a Stomp query, a Grab spokesman apologised for the inconvenience caused to the Stomper.

"We are sorry to hear about the accident and continue to be in touch with both the passenger and the driver-partner to support them with their medical and insurance needs.

"We apologise for the inconvenience [the passenger] faced, and we are reviewing our processes to better respond to similar incidents in the future."