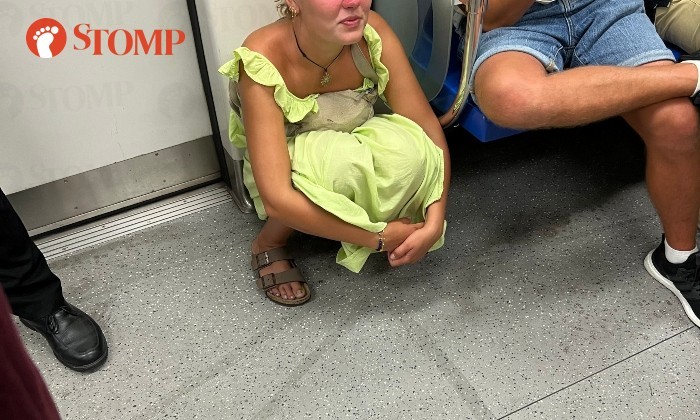 As if September is not wet enough.

A woman in a dress was caught on camera squatting in the MRT train and urinating on the floor on Friday night (Sept 16).

Sharing photos and a video of the incident, Stomper Joanne said that it happened on a train going from Clementi to Jurong East at 11pm.

She recounted: "The lady peed on the train and her friends, who were speaking in a foreign language (presumably German), stepped away from her as if they didn’t know her."

While the lady's friends might be embarrassed by her behaviour, the lady looked in the photo like she was quite okay with it as the clear liquid trickled from where she was squatting.

Was the Stomper sure it was urine? It looked like just water.

She said: "Yup, it's pee. It wasn't there when we first boarded the train. And we were debating if she and her friends were drunk or she was just sunburned.

"Then after a while, I noticed 'water' almost reaching my shoes. So I looked over to the source (her) and moved away and took those shots."

The lady was also not wearing a mask while taking public transport, but that would appear not to be her number one offence on the train.

A similar incident happened last month when another woman stunned fellow commuters by pulling down her shorts and squatting to pee on the train.