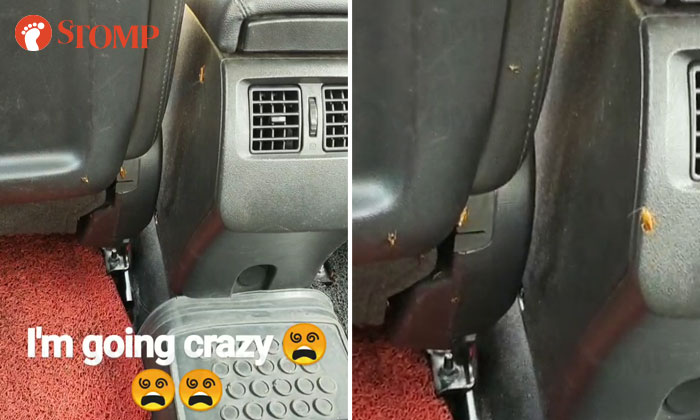 Ride-sharing is a common concept but what if your travel buddies were a family of cockroaches?

Stomper Ru Ting did not know what she was in for when she flagged down a taxi at Golden Mile Complex on Tuesday at about 1.30pm.

She had bought lunch to-go and was on her way to People's Park Complex when she noticed a cockroach crawl out from the front of the cab.

"I had put my food on the floor when I saw a couple of them come out.

"When we passed by the National Library, I picked the food up and put it on the seat next to me and held onto it.

"However, when we passed by Clarke Quay Central two of them came up onto the seat with me.

"They were quite big too!"

Ru Ting could not bear to stay in the taxi any longer so she asked the cabby to drop her off at a traffic light before Chinatown Point.

"I started tearing and told the uncle that there were cockroaches in the taxi.

"He just said it might be because of the rain.

"When I told him that there was a lot of them, he simply replied, 'really a lot ah?'

"I just didn't want them to crawl onto me or my food."

The Stomper finally alighted the taxi and paid the cabby a $6 fare.

"I later saw him pick up another passenger at Chinatown Point and thought 'good luck to that person'.

Stomp has reached out to the taxi company for comment.