Passenger on flight that returned to Perth was left 'hungry, cold and at a loss', Scoot apologises 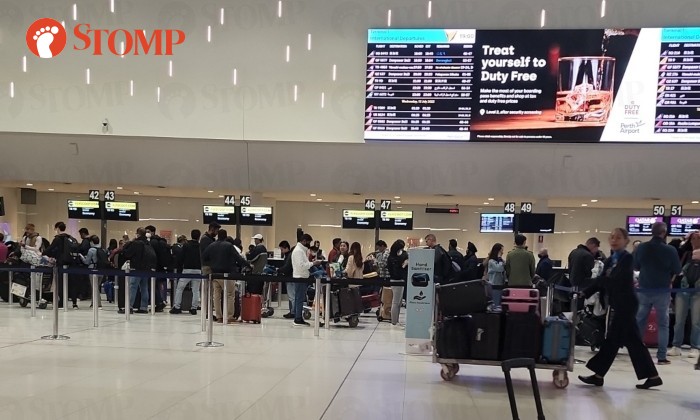 A passenger on the Singapore-bound Scoot flight TR009 that made a U-turn back to Perth on July 11 said that news reports that the airline provided accommodations for passengers were not true.

The plane returned to the Australian city after a technical fault was discovered 20 minutes into the flight at 7.40pm.

Stomper Ivan said: "Before the flight, the boarding time was already delayed by more than an hour with no explanation. When the pilot decided to do the U-turn due to an engine problem, no instruction was given or explained to the passengers on what to do and how to react when the plane was in the terminal."

He said that everything was chaotic at the airport.

"We were asked to collect our baggage and re-queue at the check-in counter. This was around 10pm with no dinner provided," recounted the Stomper.

"Everyone queued for at least an hour and when they reached the counter, we were given a taxi voucher and asked to book our own hotel room at 11pm.

"No help or assistance had been rendered, contrary to the news reporting that Scoot had assisted the passengers to look for accommodations and transport.

"We had to do a last-minute scramble to book at whatever hotel we could find at a cost of around A$300 (S$290) per night.

"The taxi voucher was useless as at midnight, there was no taxi even when we made the call.

"Basically, Scoot had left the passengers hungry, cold and at a loss."

Ivan said he was informed by the Perth counter staff that Scoot would compensate the passengers A$150 for the hotel stay if they present the receipt when they get back to Singapore.

But after returning to Singapore, when the Stomper requested compensation from Scoot, he was rejected.

The company told him: "We seek your understanding as our service level did not meet your expectation on this occasion. While we empathise with the situation, we regret to inform you that we are unable to compensate for other costs incurred on a delayed/canceled flight due to uncontrollable reasons."

In response to a Stomp query, Scoot said: "On the initial flight of TR009, Monday, 11 July, a departure delay was due to a resource limitation affecting airport operations that resulted in a later closure of the check-in counter. This is an unfortunate phenomenon that the aviation industry is facing due to the unexpected travel demands.

"In the subsequent flight, the boarding closed early. However, seat and passenger numbering discrepancies caused a delay. As a security protocol, all passenger numbers must be accounted for before clearance for take-off.

"Scoot sincerely apologises for the inconvenience our customer faced. We will continue to work closely with the relevant authorities and ground staff to assist and support our customers caught in such disruptions as best as we can."