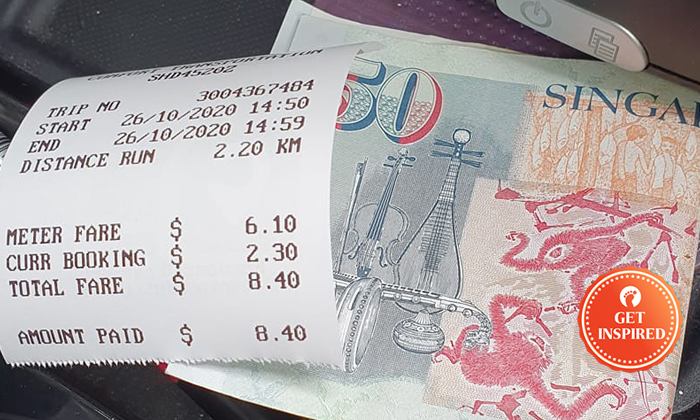 A taxi driver was touched when a passenger gave him $50 for a ride that cost $8.40 and told him to keep the change.

Facebook user Peter Quek shared the "pleasant surprise" that he received on Monday (Oct 26) and said he initially thought the passenger had mistaken the $50 note for a $10 note.

When he highlighted it to the passenger, she replied, "Dont worry, just keep it".

Speaking to Stomp, Peter said the customer had made a booking for a taxi ride from Waterloo Street to Tyrwhitt Road at around 2.45pm.

Peter, a taxi driver since March 2015, joined ComfortDelGro in December 2017.

Despite his years on the road, such generosity only happens "once in a blue moon," he said.

Peter told Stomp: "This happens probably once a year. Small tips like coins or $1-2 dollar types are more common, like daily or once every two days.

In his Facebook post, which a reader had alerted Stomp to, Peter also noted: "(What is) most valuable is not the amount of tips but the sincerity (and) appreciation."