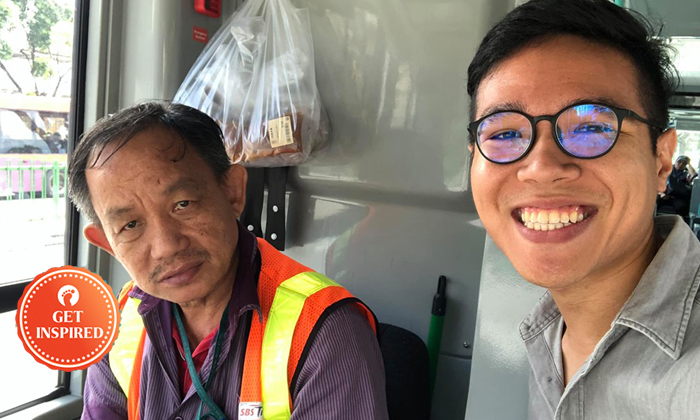 One would probably be baffled when you see a bus driver stop along his route so that he can toss bread to construction workers.

Jonathan Jabez Lee-Rappa had such an experience and posted about it on Facebook on June 14.

When Stomp reached out to Jonathan, he said: "It was about 11am, at a bus stop before Toa Payoh Stadium where the bus driver stopped for a good five seconds."

The bus driver proceeded to open the doors and tossed a packet of bread to a group of construction workers who were laying cables.

Jonathan's curiosity was piqued, so he went forward and talked to the bus driver about his actions.

He realised that the bus driver did not know the construction workers.

When the bus driver was working as a construction worker in his early 20s, his supervisor at that time had told him: "You're so young, why are you working this -- you can go and learn another trade skill, earn more money."

Although his supervisor has since returned to India, the elderly man still remembers the valuable advice he was given.

The bus driver would now always bring extra bread along his routes and toss them to any construction workers he sees toiling under the sun.

He told Jonathan: "I was there, I know what it's like to not earn much. Back then, buying a can of coke or even some bread is a luxury."

Before Jonathan got off the bus, the bus driver reminded him: "Must never forget where you come from ok?"

When Stomp asked Jonathan if he expected his post to go viral, he said: "No man, I did not."

He told Stomp: "I feel lucky to have experienced this kindness firsthand.

"I hope the uncle gets some form of tangible recognition for being a good human being.

"I wish we can find a way to enable more kind people like the bus uncle to spread more love.

"Maybe we can find someone to sponsor the uncle with more bread?"