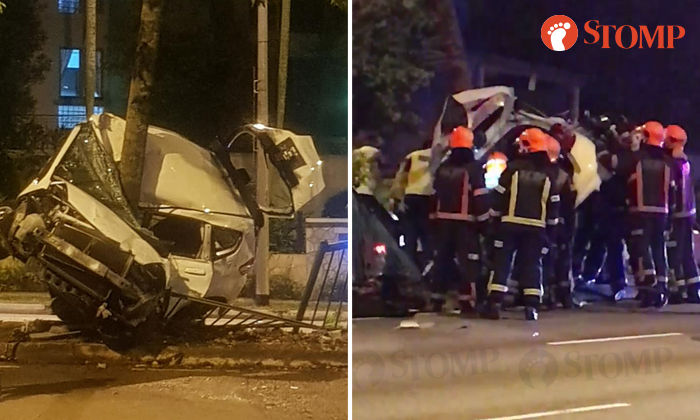 A man was killed after the car that he was travelling in crashed into a road divider and a tree along Upper Bukit Timah Road on early Sunday morning (Oct 7), while his driver was taken to hospital and later arrested.

In response to a Stomp query, the Singapore Civil Defence Force (SCDF) said it was alerted to the incident, which occurred near Springdale Condominium, at around 1.30am.

The 25-year-old car passenger was pronounced dead at the scene by paramedics.

The car driver, a 28-year-old man, was trapped inside his vehicle and extricated by the SCDF using hydraulic tools.

He was conscious when conveyed to National University Hospital and subsequently arrested for causing death by a negligent act, said the police, who were alerted at 1.31am.

Stomp understands that the driver had lost control of his car, which then mounted the centre road divider before crashing into a tree.

Stomper Yasar shared a video which he said he filmed at 1.52am, showing SCDF officers responding to the scene.

Meanwhile, photos posted by netizen Ching Rsymond in a Facebook group show a badly mangled white car and a death tent at the accident site.

The pictures are also circulating on WhatsApp.