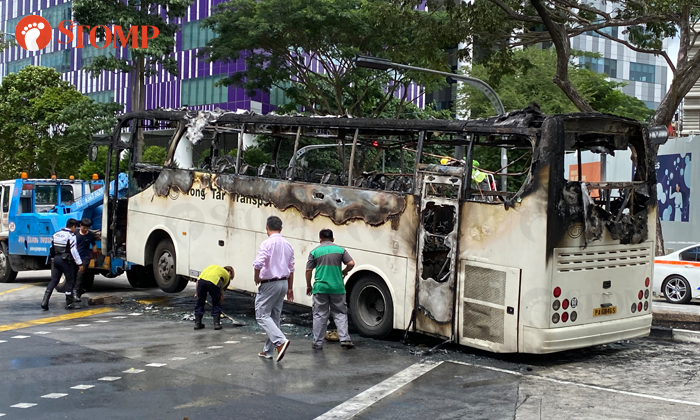 A passenger bus caught fire at the junction of Portsdown Road and One-north Gateway on Monday morning (Feb 24).

The Singapore Civil Defence Force (SCDF) told Stomp that it responded to the fire at 9.15am and extinguished it using one water jet.

One person was assessed by SCDF paramedics.

Stomper Mark, who was in his office at the Galaxis building at around 9am, submitted photos and a video showing orange flames and thick smoke from the bus.

Stomper Desmond, who also works in the vicinity, said he was first alerted to the incident after smelling something burning. He then heard an explosion.

He added: "There was a lot of smoke."

Desmond subsequently went down to the scene at around 11am and shared photos that show the bus in a charred state after the blaze was put out.

He said: "Even now, there is the lingering smell of something burnt."