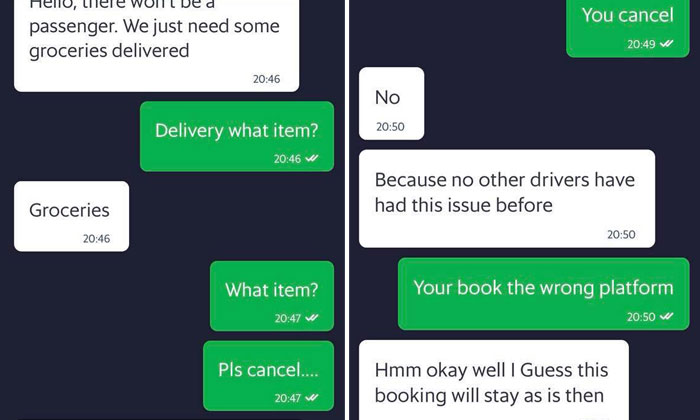 Cancelling rides has long been a bone of contention between private-hire drivers and passengers.

For the drivers, cancelling rides can affect their monetary incentives and the availability of jobs.

On the other hand, passengers have to fork out $5 per cancellation when they cancel 3 or more times, across a rolling 7 day period.

One driver was frustrated when he accepted a booking from a passenger who did not need to travel somewhere but instead, wanted to get the driver to make a grocery run.

It is unclear when this happened but the texts were exchanged on the Grab application.

After the ride was accepted, the passenger messaged the driver:

"Hello, there won't be a passenger. We just need some groceries delivered."

He then tells the driver, "If it's not okay do you mind cancelling".

He adds that it's "just two grocery bags".

The driver holds firm and again tells the passenger to cancel the ride.

The passenger tries to change tactic and assures the driver that the items are "all in transparent contents" and that he would be able to see what he is delivering.

The driver simply replies, "Nope" and then firmly says he's not going to do a delivery.

They both then tell each other to cancel the ride but neither want to do it.

The passenger justifies his stance by saying "no other drivers have had this issue before".

The driver retorts that he booked the wrong platform.

"Hmm okay well I guess this booking will stay as is then," replies the passenger.

(Read the full exchange in the gallery above)

It is unknown who finally gave in.

Netizens have slammed the passenger for trying to make use of the driver to "save money".

In a similar incident, Stomp previously reported on a passenger who had asked a Grab driver to help him buy cigarettes before picking him up.

In August last year, the Land Transport Authority said that taxi drivers and private-hire drivers are not allowed to be couriers or deliverymen for goods if there is no passenger on board.

LTA told The Straits Times: "Under our regulations, taxis and private-hire cars are meant to carry passengers for hire and reward, and cannot be used solely for the conveyance of goods."

Last month, local transportation start-up Ryde's announcement of its new service RydeSend was met with a warning from the LTA which said the service would "contravene the regulations prohibiting Public Service Vehicles such as taxis and private hire cars from solely conveying goods".

Related Stories
This champion Grab rider Felix wants driver to get him Camel cigarettes on the way
Passenger makes Grab driver go to cemetery at night, then goes MIA as a prank
Grab passenger gets charged cancellation fee after driver increases waiting time from 3 to 20 min
More About:
grab
driver
passenger
inconsiderate
rude