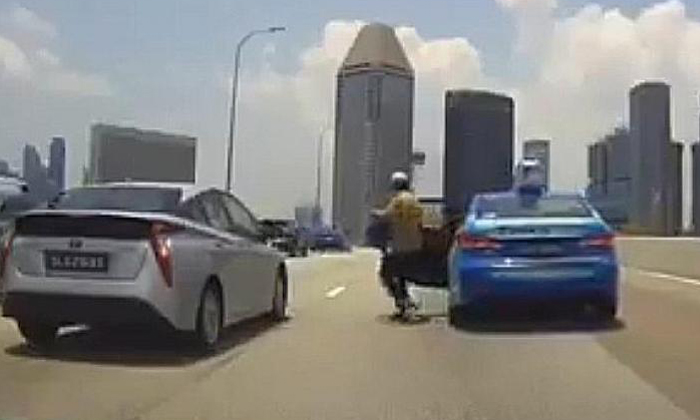 The passenger who alighted from a moving taxi on the Benjamin Sheares Bridge did so because he thought the cabby had stopped the vehicle after colliding with the centre divider.

Speaking to The New Paper yesterday, the passenger's brother-in-law, Mr Jameel Mohamed, said the 57-year-old was shaken by the accident.

"No one would want to get out because it was right in the middle of the East Coast Parkway, but he was more afraid of being in the cab," added Mr Jameel, a money changer.

The accident happened last Friday at about 1.10pm.

A dashcam video of the incident went viral after it was uploaded onto Roads.sg.

It showed a Comfort taxi swerving in and out of the right-most lane on the bridge. The taxi then hits the centre divider of the expressway, before swerving across two lanes.

Other road users are seen slowing down or moving out of the way to avoid the taxi.

As the taxi slows down, its left passenger door opens and a man steps out. He closes the door and moves to the side of the road as the taxi moves forward.

Mr Jameel, 44, said his brother-in-law, whose name he gave only as Mohamed, had hailed the taxi around 1pm from Marine Terrace to go to the Masjid Jamae mosque in South Beach Road for prayers.

According to him, the cabby, who looked to be an elderly man, began to drive haphazardly on the expressway, moving in and out of lanes and driving too close to the centre divider.

Mr Jameel said: "My brother-in-law asked the driver to stop if he was not fit to drive, but the driver only turned to look at him, and did not respond."

Mr Jameel said that as his brother-in-law stepped out of the taxi, the cabby drove off, leaving him on the ECP.

Thankfully, a woman in a red car driving behind the taxi stopped and gave him a ride.

Mr Jameel said: "The lady asked him if he was hurt and if he needed medical attention. He was very shaken up and said he wanted to go home."

Some netizens had asked if the passenger could have done something to help the driver, instead of walking away.

But Mr Jameel said: "My brother-in-law is not a driver, so it's unfair for people to think that he could have done anything in that situation. He didn't call for help because he thought since the driver drove off, he had recovered and was fine."

Comfort DelGro's group chief corporate communications officer Tammy Tan said the driver had "blacked out momentarily", and woke up to an empty car.

The driver had then called for help and was admitted to hospital for observation.