Pasir Ris resident gets lucky sighting of hornbill outside his window 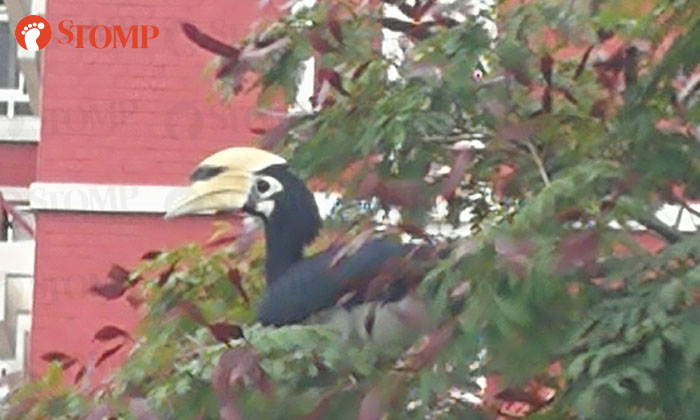 Stomper Azhar was gaming in his room when he caught something "huge" flying outside his window out of the corner of his eye.

To his surprise, it was a hornbill.

"It was perched on a branch, just outside my window," said Azhar.

Curious about the species of the bird, Azhar then searched the Internet for its name and found out that it was an Oriental Pied Hornbill.

"It perched there for a couple of minutes then jumped and tried to catch a yellow oriole, which is seen in my area almost every week.

"But that hornbill though, was such a rare sight, especially in Pasir Ris."

The Oriental Pied Hornbill is a species native to Singapore, and is commonly spotted at Pulau Ubin and sometimes around Changi.

It may sometimes visit inhabited areas to feed on fruit, but it still depends on large living trees for nesting sites.

Related Stories
Nice Lambo over there, but these folks at Yishun St 11 have their eyes glued to something else
That's right! These photos of shy wild animals were all taken in S'pore
Rare peregrine falcon seen feasting on rooftop of Punggol Place block
More About:
bird
animals
unusual
rare