Parts of ceiling at NEX shopping mall fall due to water leakage, tenants made to stop operations 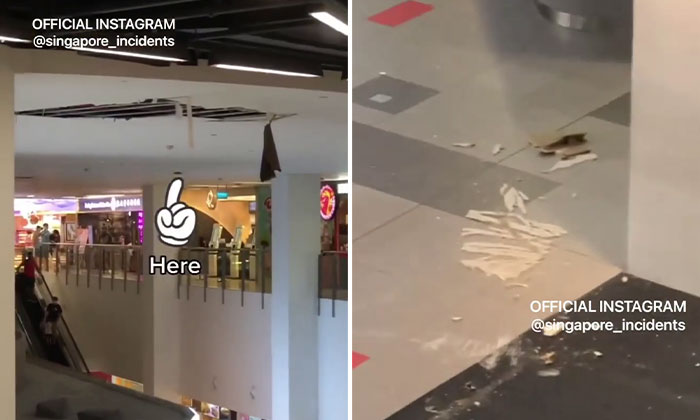 Operations came to a standstill for some tenants at NEX shopping mall after a water leakage incident on Saturday (Aug 6).

The water leak also caused parts of the mall's ceiling to fall.

In photos and videos shared on social media, a hole was seen in the ceiling of basement 1 of the mall.

Pieces of white plaster were scattered on the floor of basement 2. The area had been cordoned off.

In response to a Stomp query, a NEX spokesman confirmed that the mall was alerted to a water backflow incident by a tenant on the first floor at about 5.55pm on Aug 6.

"Our operations team onsite had responded immediately to assist," the spokesman said.

"A plumbing issue was subsequently identified to originate from the tenant's floor trap where the water backflow had spread to their retail area and leaked down to B1 and B2.

"Contractors were deployed to fix the choke which was resolved by 11pm.

"The remnant water continued to leak down from the unit and has affected some tenants across B1 and B2.

"For the safety of our tenants and shoppers, we informed affected tenants to suspend operations until the issue is fully rectified.

"We apologise for the inconvenience caused to our tenants and shoppers.

The mall added that as of Monday (Aug 8), checks and rectification works have been carried out in the affected area and the basement 2 area is now open and accessible to shoppers.

Related Stories
'No home to return to': Mum after 100kg false ceiling collapses in master bedroom
Town council apologises to woman hit by ceiling board that fell from Yishun sheltered linkway
Part of false ceiling falls from building in NTU, no injuries reported
More About:
breakdown
ceiling collapse
leak
water