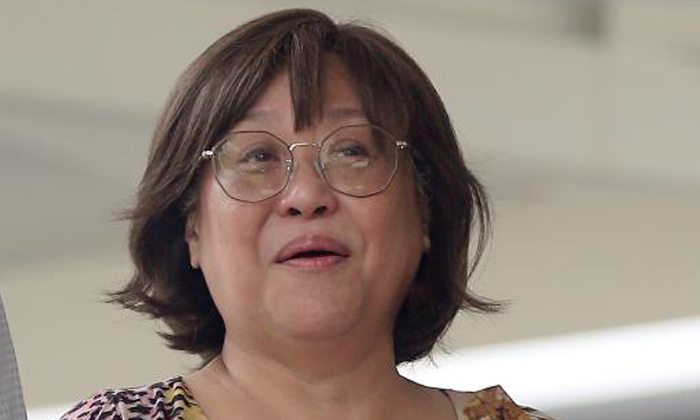 Shaffiq Alkhatib
The Straits Times
May 29, 2019

A part-time English teacher met a man online and he convinced her into allowing $50,030 to be deposited into her bank account.

The man, known only as Collins, did not tell Christina Cheong Yoke Lin that the money was the proceeds of a love scam perpetrated on another woman.

Cheong felt suspicious but did not alert the police when he told her to pass $50,000 to "one of his boss' associates".

Instead, she ignored Collins' instructions and decided to keep the money for herself. The 63-year-old Singaporean pleaded guilty on Wednesday (May 29) to dishonestly misappropriating the cash.

The court heard that she knew Collins through an online dating platform, Badoo, in early August 2017. She told him that she was in debt and he then asked if she would allow his boss' associates to make use of her bank accounts.

Deputy Public Prosecutor Ng Jun Chong said: "Collins explained that the accused could take $500 out of each transaction and bring the rest of the money to Johor Baru, Malaysia.

"After asking why the money could not be paid directly into his boss' account, and if she would get into trouble for carrying 'lots of money', the accused agreed to 'try out' the arrangement."

DPP Ng said: "From Aug 18 until Aug 27, 2017, Collins asked the accused repeatedly about the money but the accused kept making excuses and ignoring his WhatsApp voice calls.

"Finally, on Aug 27, 2017, Collins fell out with the accused and called her a 'thief' via WhatsApp... Thereafter, the accused ignored several WhatsApp messages and voice calls from Collins before blocking him."

On Aug 21, 2017, Cheong transferred $31,000 to a Malaysian bank account as she wanted to help another man with whom she was in love with.

However, the man, known only as Mark Anthony, was also a scammer who had told her that he was purportedly detained by the Malaysian authorities.

The DPP said: "As for the remaining $19,000, from Aug 18 to Sept 4 , 2017, the accused spent $1,000 on her own expenses and transferred the remainder to various foreign bank accounts over several occasions pursuant to the instructions of one 'Chong Lee', who had promised to give the accused $800,000 for her help as part of an inheritance scam."

Cheong was caught after the 54-year-old Singaporean woman linked to Collins' love scam alerted the police on Sept 22 that year. Court documents did not state the outcome of the case involving Collins.

Defence lawyer Yu Kexin told the court on Wednesday that Cheong has made full restitution.

Ms Yu urged District Judge Ng Peng Hong to call for a report to assess her client's suitability for a mandatory treatment order (MTO), saying that Cheong was suffering from major depressive disorder when she committed the offence.

Offenders given an MTO have to undergo treatment for their mental condition in lieu of jail time. Judge Ng has called for the report and Cheong, who was offered bail of $25,000, will be back in court on June 26.

For dishonestly misappropriating the money, she can be jailed for up to two years and fined.

Related Stories
Man receives police advisory about sex scams, ignores it and gets cheated of $700 minutes later
Man who cheated 6 women of nearly $437k after meeting them on dating apps gets jailed
Married woman, 48, scammed of $7k by 'Facebook BF' -- whom she has never met
More About:
money
scam
court