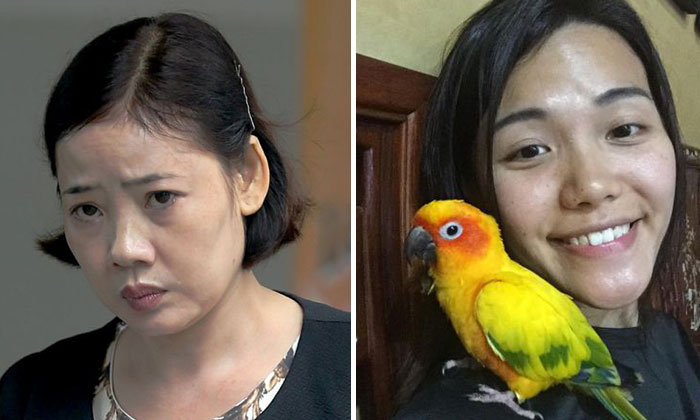 A woman was sentenced to four weeks’ jail on Wednesday (Aug 1) after pleading guilty to ill-treating and killing her stepdaughter’s parrot, Lucky.

Tran Thi Thuy Hang, 38, had bludgeoned the bird to death with a bamboo laundry pole, before throwing its carcass and cage down a rubbish chute on the morning of Oct 28 last year, reports The Straits Times.

A day before the incident, Hang’s stepdaughter, Ms Yu Mei Ling, 26, had been carrying Lucky on her shoulder in the living room of their Sengkang flat when Hang returned home after work.

As Hang walked past the two, Lucky suddenly flew towards her and bit her on the right cheek. Hang immediately ran into her room to complain to her husband, Mr Yu Ching Meng, 60, whom she wedded in 2005.

The enraged Hang demanded Lucky to be removed from the flat and threatened to kill it if it wasn't. This was confirmed by Agri-Food and Veterinary Authority (AVA) prosecutor Yap Teck Chuan in court.

At about 8am the following day, Hang attacked the bird, hitting it with a bamboo laundry pole repeatedly until it died. Both Mr Yu and Ms Yu were not at home during the assault.

When Mr Yu went home from his breakfast, Hang showed her husband the carcass of the bird and told him that she had killed the bird.

She then dumped the Lucky’s carcass and its cage down the central rubbish chute located outside the unit.

Ms Yu lodged a report with AVA at around 3.15pm on Nov 6, 2016, about a week after the incident. She said that her parrot had been killed by her stepmother.

During the sentencing, District Judge Adam Nakhoda said that Hang's actions were cruel, calculated and deliberate.

The ill-treatment of the bird violates the Animals and Birds Act, for which offenders can be jailed up to 18 months, fined up to $15,000, or both.

Ms Yu told The Straits Times that she was glad that the case had come to a close, adding that she had been hesitant to inform the authorities at first.

She ultimately alerted AVA when she realised Hang was not apologetic about Lucky’s death.

“Most of my neighbours know my parrot, and everyone plays with him. He is not aggressive at all.”

"I don't know why he would reach out to bite her. I was shocked too, it was the first time he did something like that.”

Ms Yu revealed that Lucky was given to her by her father when the bird was about a year old. Mr Yu chose the name “Lucky” because he thought that it would bring all of them luck.

Lucky was seven years old when he was killed, said Ms Yu, and her father also misses the bird.

Ms Yu got another Sun Conure parrot for her father as a birthday gift in December last year after consulting Hang to see if she was agreeable.