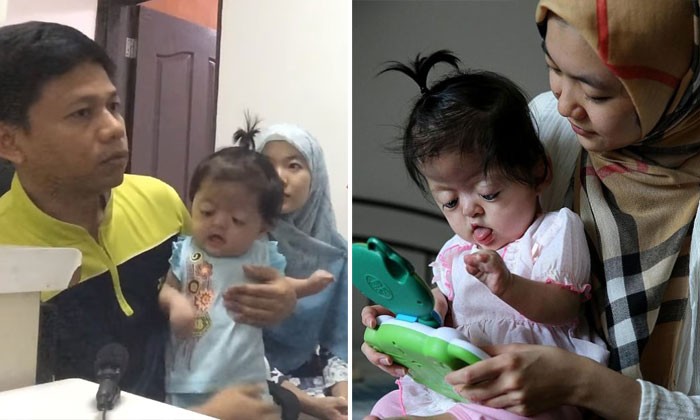 Like all mothers, Duong Thi Hai Nhi, 23, has a simple wish - for her baby to grow up healthy. But her wish is far harder to fulfil.

This is because Rizky Ramadhani, who is just a month shy of her first birthday, suffers from Apert Syndrome - a genetic disorder that causes the premature fusion of certain bones in the skull, as well as the fingers and toes.

The abnormal development of her fingers and toes has led to an infection that causes her right hand to swell and occasionally bleed.

Before surgery, her abnormal skull shape caused respiratory distress that required a tube to be inserted in her airways.

Because of the shape of her skull, she is unable to close her eyes fully, even during sleep. This led to an eye infection when she was just three months old.

Now, Madam Hai Nhi and her 42-year-old husband Eko Susilo, an engineer, have to apply eyedrops to Rizky's eyes every two hours to prevent them from drying out or getting infected. Before sleeping, her eyelids have to be taped shut.

She also suffers from Ventricular Septal Defect, a congenital heart disease, and various other physical defects.

Rizky's condition has led to her family facing a multitude of difficulties, both financially and emotionally.

In order to get a higher-paying job to afford Rizky's hospital bills, the family of three moved to Singapore from Malacca in January. But with the move came higher hospital bills.

So far, the family has spent $20,000 on Rizky's medical treatments.

To allow her brain to develop properly, Rizky requires a forehead advancement surgery soon. But, the estimated hospital bill is $42,500, and it could go higher if there are complications.

If she does not get the surgery soon, Rizky's brain would not be able to develop properly and she may suffer from mental retardation or have a lower than normal IQ. She might also require various surgical procedures until she turns 12.

The couple have started a crowdfunding campaign on GIVE.asia in hopes of raising enough money for the surgery, which will also separate her finger bones and allow her to close her eyelids during sleep.

Cradling Rizky, a teary Madam Hai Nhi told The New Paper: "I hope for Rizky to be healthy and grow up like a normal kid. I love her so much."

When asked about her reaction to finding out about Rizky's condition, she said: "The first few days, I couldn't take it and kept crying. I felt like the world was upside down.

"I see my baby is suffering and in a lot of pain. I have to be responsible for her, take good care of her. I'm very happy to have her. I love her so much."

Related Stories
Man who died after Tokyo trip: Family to donate money that was raised to bring him home
Why this terminally ill grandma bought 10,000 bowls of porridge before her death
Mother who died in Jurong accident: Dad of premature baby thanks public for concern
More About:
heartwarming
inspiring
heartbreaking
crowdfunding