Parcel not picked up after customer paid $119 for postage: SingPost apologises and provides refund 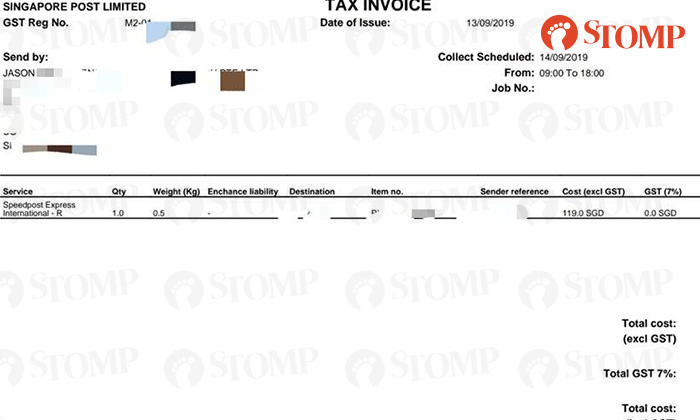 SingPost has apologised and provided a refund after failing to pick up a customer's parcel on Sep 14 and not informing him about it.

Stomper Jason told Stomp: "We paid for a parcel to be sent by Speedpost.

"After making payment, we received an invoice saying that the parcel would be picked up on Sep 14, between 9am and 6pm.

"Throughout the day, no one came to pick up the parcel and we weren't informed about this either.

"We needed the parcel to be sent to Shenzhen, China within two working days, that's why we paid for Speedpost.

"It costs $119 for this service. No one followed up on this to give us an update regarding what happened of if they would issue a refund.

"SingPost did nothing and we had to pay such a high price for this postage service.

"Despite calling numerous times and going on their website's live chat asking for updates, we still haven't been contacted.

"So we contacted Stomp hoping to find a helpful solution.

"We have used SingPost for local mail a lot of times but this is the first time we're using their services for international postage.

"We just hope they'll provide us with a full refund. It's only fair for them to do so.

"They told us they'll pick up on Sep 14 and they didn't. It's like we're paying for a promise that wasn't fulfilled."

In response to a Stomp query, a SingPost spokesperson said: "SingPost would like to offer our sincerest apologies to Jason for his experience.

"We have contacted him, and approved a refund for his transaction."