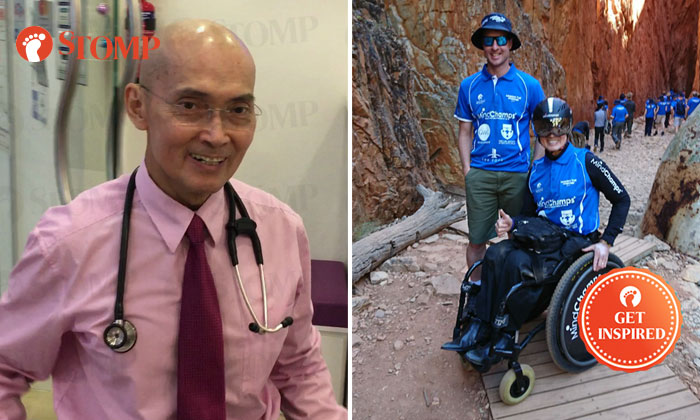 Despite being paralysed from the waist down from the age of 2 and surviving Stage 4 cancer, Dr William Tan shows no signs of slowing down anytime soon.

The accomplished Paralympian will be the first wheelchair-bound person in history to take up The Larapinta Trail challenge in Australia.

Stomp caught up with Dr Tan before he embarked on his trip at the MindChamps medical clinic at ONEKM mall on Aug 10.

Although Dr Tan has taken part in countless marathons, including the prestigious Boston Marathon and demanding marathons in the Antarctic and North Pole, the multiple gold-medallist said that The Larapinta Trail is a whole other ball game.

He will be attempting 65 kilometres on the rugged landscape of The Larapinta Trail which may be rough, hard and very steep.

There are also wild animals like dingoes, wallabies and snakes.

"I have never undertaken a challenge in that kind of terrain before," said Dr Tan.

"Being in my seventh year in remission from Stage 4 leukaemia, I was rather cautious."

However, after some thinking, he saw his second chance at life as an opportunity to do more for humanity.

His goal is to raise $15,000 to support indigenous education, health, research and community organised by his alma mater, the University of Newcastle Australia.

Dr Tan is being sponsored by MindChamps where he is the MindChamps Academy Programme Director and MindChamps Medical Chief Strategy Officer.

The doctor with a big heart has raised over $18 million on a voluntary basis for charities locally and internationally over the last 22 years.

Being an inspiration is an understatement.

"Having travelled this journey several years against adversity has built in me this resilience," he said.

"If there's any way I can make a difference, why not?"

He thanks his parents for giving him the right mindset when he was young.

"They said to me, 'you may be paralysed from the waist down but your brain is not paralysed, your arms are not paralysed. Make the best of what you have.'"

Even now, despite what he has gone through, the 60-year-old recently shaved an amazing 26 minutes off his timing at the Boston Marathon in April this year.

He added that when he was told he had just nine to 12 months to live after being diagnosed with cancer, he discovered that what matters most is to maximise each day to the best of his ability like it's the last day of his life.

When asked what he thought of Stomp's feature on everyday heroes and kind gestures, he replied that the stories touched him.

"In a society like Singapore, where every one of us is so busy rushing around to meet deadlines and to make it for the next appointment, sometimes we become careless about the needs of others behind us.

"To me, every gesture, no matter how big or small, is a gesture of kindness from the heart and is equally as important."