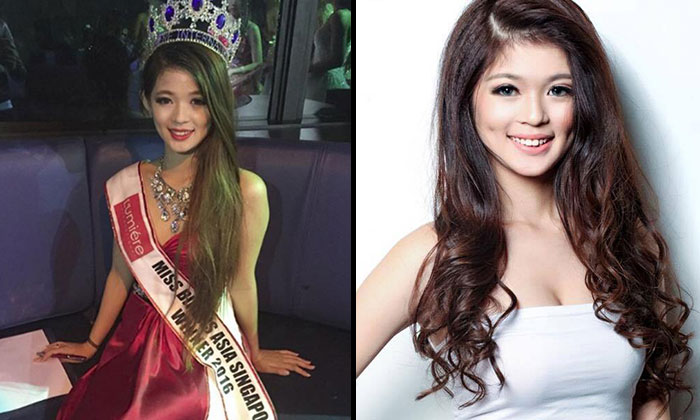 A winner of a beauty pageant claimed that the organiser did not hand her the $3,000 prize money she was entitled to.

In response, the organiser said that her nude photos have been leaked online, and stripped her of the title on grounds of 'unacceptable behaviour’.

Melissa Wix, 22, the former winner of Miss Bikinis Asia Singapore 2016, a pageant organised by Lumiere International, told Shin Min Daily News that she was promised a $3,000 cash after winning the contest.

However, she claimed that the organisers did not uphold their bargain, and she has only received $500 to date.

Furthermore, she had to fork out money from her own pockets to participate in the pageant.

She said: "The contract between the company and I ended in April 2017. I have done my part, but the company keeps finding trouble with me."

"They harassed me on Facebook and through my email, and even stripped me of my title."

Ms Wix said that she lodged a police report in November 2017 over the alleged harassment, and received a lawyer letter from the company in January 2018.

She said that the company demanded a public apology or a six digital sum compensation.

Said Ms Wix: "On Tuesday night (Feb 13), a spokesman for the company called me, and asked me to remove my Facebook posting, or the company will pursue legal actions.

“I did not agree to the company’s demands, and I intend to report the case to the police when I return back to Singapore after Chinese New Year."

When reporters contacted Lumiere International, a spokesman, Ms Chen Hui Lin, denied the accusations made by Ms Wix and instead accused her of defamation.

The remaining $2,000 was a model contract with the company.

The $1,000 cash money would be given out in two intervals -- specifically, after the winner was crowned, and the conclusion of the subsequent pageant in 2017.

The spokesman said: "After Melissa was crowned the winner, she received $500 cash immediately. The company also informed her of the clauses and conditions, which she agreed to."

Ms Chen added that the company later found nude photos of Ms Wix circulating online, and considers this to be a serious harm to its reputation.

As such, it has decided to cancel all existing job opportunities given to Ms Wix, as well as her title.

She said: "To the company, a pageant winner shouldn't just be beautiful on the outside but more importantly, have an upright character. Ms Wix is not a good role model, and the company was forced to make a decision.

"With regard to her defaming the company, we have already reported the case to the police, and we will be pursuing legal action."