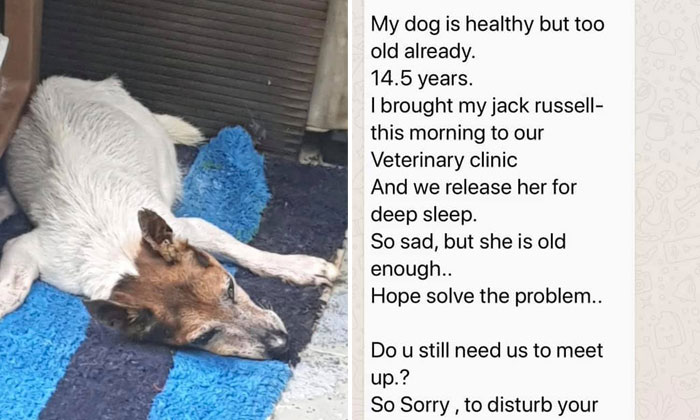 A dog owner reportedly put his dog to sleep after an animal welfare group had started looking into allegations of animal abuse.

Stomper Joanna alerted Stomp to a post by a Facebook user who said she had witnessed a Jack Russel Terrier left out in the hot sun and rain at a residence at Holland Village.

She also alleged that she saw a woman kicking the dog.

She shared videos of the dog struggling to eat its food that was left on the ground instead of in a bowl and of it relentlessly barking in an apparent call for help.

After Rei's post started circulating, animal welfare group Chained Dog Awareness in Singapore (CDAS) started looking into the case and visited the owner's residence on Sunday (Mar 22) at about 11.30am.

CDAS wrote in a Facebook post on Monday afternoon (Mar 23) that the owner had told one of its volunteers that the dog was eight years old and was very sick.

When the volunteer returned to the house about half an hour later in hopes of getting the owner to let them bring the dog to a vet, they were unable to catch hold of the owner.

CDAS spoke to a neighbour who told them that the dog had been in this "state" for the last 18 months: Dragging its feet, barking relentlessly but still had a good appetite.

On Sunday night, they received a call from the owner who agreed to meet on Monday afternoon.

However, they were shocked when the owner texted them at 11.15am on Monday that he had put his dog to sleep.

CDAS said: "We are not here to judge the owner but we cannot contain our disgust..."

They raised the following questions: