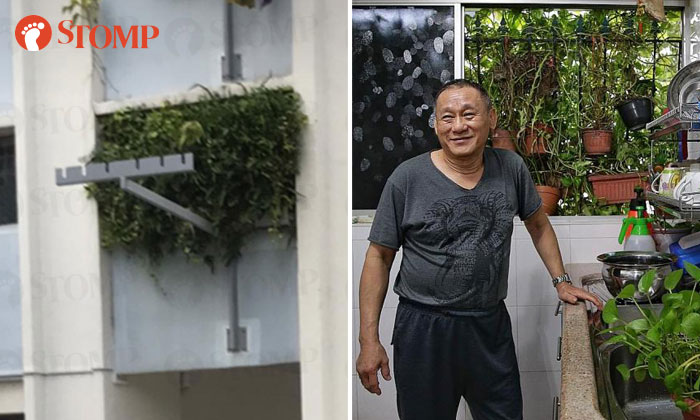 It looks like a jungle bursting from within the second storey HDB flat at Block 158 Tampines Street 12.

And it has made some members of the public jittery during Singapore's worst dengue outbreak.

And because he makes sure water does not pool in his flower pots, preventing mosquitoes from breeding, his neighbours are fine with him keeping his tropical "rainforest" indoors.

Mr Lee, 71, who lives with his wife and child, spends up to four hours daily tending to his plants at the windows and along the common corridor.

Recently, a picture of the unit was featured on citizen journalism website Stomp. It showed a curtain of money plants covering the windows.

The Tampines Town Council visited his flat on Tuesday morning asking him to trim some of his plants.

A neighbour, who did not want to be identified, said he was not bothered by the foliage.

He said: "It has been like this for more than 10 years. They are adults, so they should know how to be responsible."

Another neighbour, who wanted to be known only as Mr Ranjit, 68, said: "They have a huge jungle, but Mr Lee takes care of his place, spraying insecticide and making sure there is no stagnant water."

There are no dengue clusters in the area, according to the National Environment Agency's website.

Mr Lee invited The New Paper inside his flat on Tuesday, which was spotless with neatly arranged furniture.

He also showed how he placed tissues below the pots to prevent any water from pooling.

He said: "It is only when it is dengue season that we get feedback and complaints. But every time the authorities check, they can't find a single mosquito or stagnant water."

He admitted he was recently warned over the plants posing a falling risk from the windows and was told to trim the foliage.

A spokesman for Tampines Town Council said: "As the plants are grown within the residential unit, we are working closely alongside HDB and other stakeholders to engage with the residents to advise them to maintain their plants regularly."

But Mr Lee does not intend to trim his plants, despite being asked repeatedly to do so.

" I like the plants as they are," he said. "It is like someone who has intentionally grown their hair long. They won't cut it even if you asked them to."