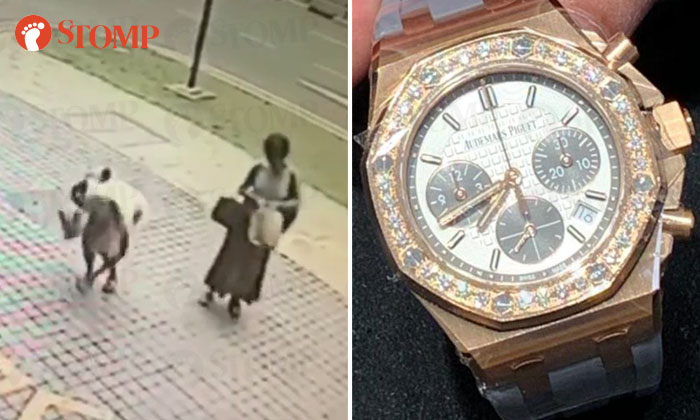 Stomper Ng is looking for two women who had picked up her Audemars Piguet watch worth $40,761 at the OrangeTee Building's pick-up point in Toa Payoh on Oct 10.

Ng realised she had unknowingly dropped the watch at the pick-up area that morning when she and her husband could not locate it in their car.

She drove back to the building at 430 Lorong 6 Toa Payoh and sought assistance from the building's management to view footage from the CCTV cameras.

In the footage she shared with Stomp, two women are seen walking along the pavement near the pick-up area when they notice the watch lying on the ground at about 11.10am.

They walk over to it and pick it up.

Ng, who has since made a police report, told Stomp she hopes the two women will return her the limited edition watch.

Her husband is also offering the ladies a reward as a gesture of appreciation. She declined to share how much they will be giving.

The police confirmed with Stomp a report was lodged and investigations are ongoing.

Related Stories
Mum rewarding $100 for return of custom-made baby carrier she left on train
Man offering $1,000 reward for guitar that fell out of moving lorry: 'I just want my baby back'
Single mother puts up note after losing purse containing $800 at Telok Blangah -- but later finds it torn up
More About:
appeal
lost
watch
luxury
expensive