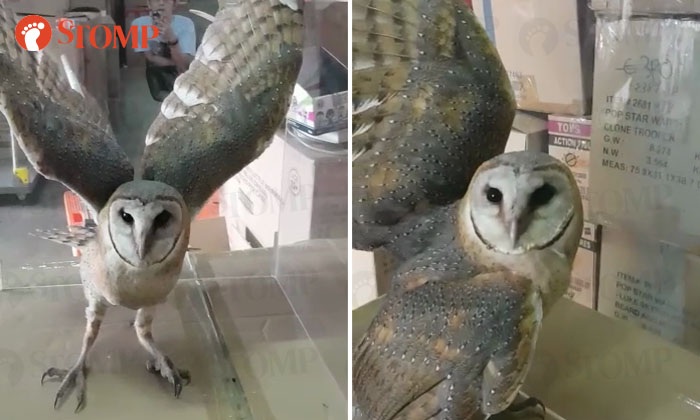 An owl was discovered at about 11am on Monday (Sep 17), in a warehouse located in the area of Genting Lane.

A Stomper, an employee of the warehouse, had just entered the room when he saw the owl in it.

In a video taken by him, an owl with pitch-black irises and a white face with brown feathers is seen thrashing around within a transparent box.

He said: "I don't know how it got there but the owl was initially trapped between a box and a window. I don't know what kind is it too."

Judging from the owl's white face and brown feathers, it seems to be a barn owl.

According to a website, it is found almost everywhere in the world except for polar and desert regions.

"My colleague called the Animal Concerns Research and Education Society (Acres) and they told us if the owl wasn't injured then it can just be released," said the Stomper.

"Then we put it in a transparent box to check whether is it injured but there were no visible injuries so we released it."

The Stomper added that this was his first time "coming face-to-face with an owl" and that he was a little scared.

"Because I've never handled an owl before," he said.

Fortunately, he has a colleague who knew how to handle birds.

"One of my colleagues has a bird at home, so he knew how to capture the owl for us to check for injuries."

In a separate video posted on Facebook by the Stomper's colleague, the owl was finally freed from the confines of the box and voices are heard bidding farewell to it.

In a caption, he said: "Reunited with mother nature, we'll meet again if we have an affinity."