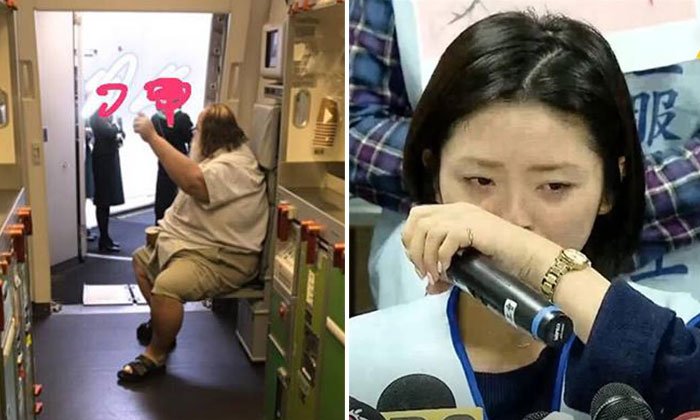 Several female flight attendants were allegedly coerced by a male passenger to 'help' him remove his underwear and wipe his backside after he took a dump.

The incident occurred enroute a long-haul flight from Los Angeles to Taiwan on Taiwanese airline EVA Air on Jan 19, and made headlines after a man named Jeff Lin posted about the incident on Facebook.

One of the flight attendants, known by her last name, Kuo, held a press conference on Jan 21, accompanied by members of Taoyuan Flight Attendants Union.

According to Kuo’s recount of the incident, the passenger, who was obese and wheelchair-bound, informed them that he required assistance going to the toilet as he had injured his right arm.

Not long after they helped him into the toilet, the man demanded that they help him remove his underwear, which was already pulled down halfway.

Despite their attempts to turn down his excessive request, he refused to take no for an answer. The crew could only give in to his request.

This, however, was not the end of their ordeal.

The passenger called them in again after he had finished relieving himself. This time around, the man made another overboard request - for them to wipe his backside for him.

As the flight had an all-female crew, there were no male crew for them to turn to for help. They could not leave the passenger alone in the toilet as well. With no other alternative, they could only accede to his request.

Kuo's chief attendant took on the burden of helping him wipe his backside. However, they were left traumatised when the man started letting out moans, saying, "deeper, deeper, deeper".

The entire incident finally ended after they helped him put on his underwear and helped him back to his seat.

Apparently, this was not the first time the male passenger had caused trouble when flying with the airline.

Since then, Taoyuan Flight Attendants Union has urged EVA Air to respond and properly address this issue. They proposed that standard operating procedures, such as ensuring that physically-challenged passengers are accompanied by their caretakers, should be established, and that employees should be able to turn down unreasonable demands made by the passengers.

Meanwhile, EVA Air has issued a statement this morning in response to this incident, saying that their crew members are not obliged to accept demands that they deem inappropriate from passengers. According to the airline, investigations will be conducted and appropriate measures will be taken if the passenger is found to have exceeded his boundaries.