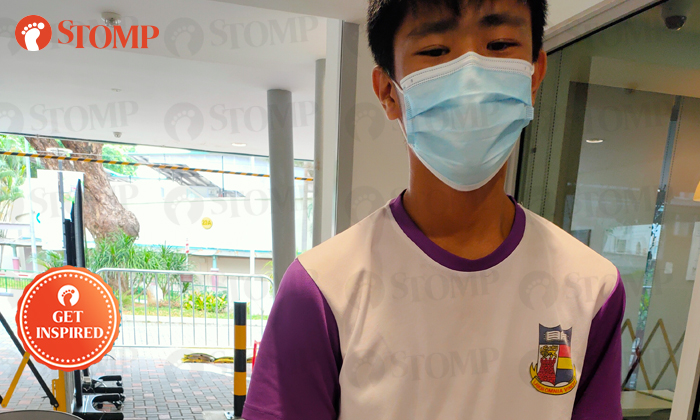 A passer-by was moved to tears upon witnessing how a 15-year-old boy went the extra mile to help a wheelchair-bound elderly man who had gotten lost.

The boy, identified as Kean Koe from Outram Secondary School, treated the elderly man so kindly that Stomper Angela had thought they were related by blood.

Angela said she was on duty at Radin Mas Community Club as a volunteer on March 16 when she encountered the pair.

She told Stomp: "I was performing my duties and thought Kean was the grandson, but the elderly man told me otherwise.

"He was here at the community club to register and book a date for his Covid-19 vaccination, but had earlier alighted at the wrong bus stop.

"The elderly man told me, 'This kind boy helped me as I was lost and brought me here.'

"Kean waited patiently with the uncle to have his appointment booked, then went the extra mile to send him home.

"I truly applaud Kean and his initiative. He was attending lessons over the school holidays but went the distance to help the elderly man.

"He moved me to tears with his awesome act of kindness."

Angela said Kean agreed to let her take a photo of him, but the elderly man was 'paiseh'.

She added: "Kean's kind deed as a youth speaks volumes of his character. By making the right decision to render assistance, he has done his school and our nation proud.

"I would like to commend and encourage all students to also emulate such heartwarming gestures and be a caring society."

In response to a Stomp query, Ms Guinieve Yeo, vice-principal of Outram Secondary School, said: "It was heartwarming to learn of our Outramian Kean Koe going the extra mile in his kind act to help the elderly man he met at Radin Mas.

"He is indeed a good role-model for his peers.

"Kean had put into his set of habits what he had learnt all these years through his family upbringing, CCE and Values in Action programme in school.

"We will continue to do our utmost to encourage and educate all our students to serve and care for their community around them.

"We would also like to share that when we informed his parents of what he had done, Kean’s parents shared that they were very surprised as he had not told them about it. They are very proud of what he’s done and his civic-mindedness."

As for Kean, helping the wheelchair-bound man came as second nature to him.

The Secondary 4 student shared: "I just wanted to help this elderly man. When I saw him, I was thinking about my grandmother who also uses a walking aid.

"I didn't expect to be praised for my act as I was doing what I can to help him."