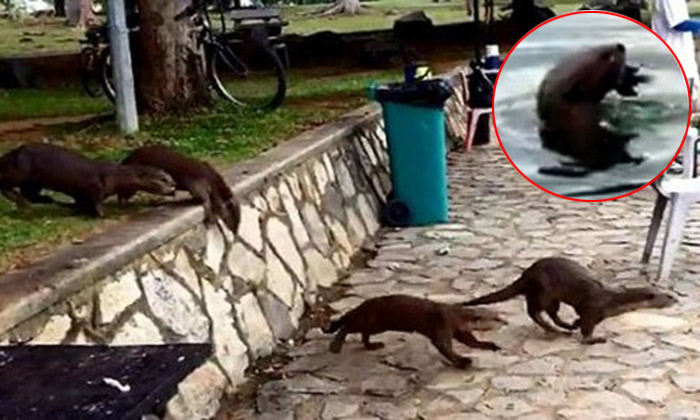 They came, they ate, and they left. Then they came again.

A family of nine otters has been raiding a commercial fishing pond at Pasir Ris Park over the past six months to feast on the fish.

And the carnivorous mammals have quite an appetite, which has left Mr Darren Seng, who owns D'Best Recreation, with a big hole in his pocket.

He estimates that each raid by the otters – and they come almost daily – costs him about $300 to $500 worth of fish.

He said that since he bought D'Best Recreation in August 2014, he has seen two otters feeding on his fish.

But the problem has become worse over the last six months.

"There used to be only two otters, but now there are nine. Two more, and they could form a football team," Mr Seng, 36, told The New Paper yesterday in jest.

But it's no laughing matter when his business is losing thousands of dollars monthly to the otters, and he can't do much to stop their raids apart from trying to keep them away.

Otters, like all wildlife in Singapore, are protected under the law, and cannot be killed or harmed.

In any case, the re-emergence of the smooth-coated otters on the island in recent years should be cherished because they were once thought to be extinct.

So Mr Seng has come to terms with his predicament, though it still hurts when he tallies up his losses.

"The fishes in the pond are bought for the anglers to catch, so they will disappear anyway," he said.

The fishing pond is open round the clock for anglers to catch saltwater fish. It costs from $43 for eight hours of fishing, depending on the time slots.

"Since the start of the year, my staff have reported an increase in the number of otter sightings," Mr Seng added.

Over the last six months or more, the otters have emerged from the nearby Tampines River, heading to the pond almost daily to feed on the fish.

TNP was alerted to a video, which was taken on Tuesday afternoon, that captured a family of seven otters making their way into the pond.

They were filmed munching on their catch while casually floating in the water and seemingly oblivious to the humans close by observing them.

"In the beginning, the otters would come in the early hours of the morning when it is darker and there aren't many people around," said Mr Seng.

"Now they come and eat our fishes even when it's bright and there are people around."

When TNP visited the pond yesterday afternoon, there were no otters in sight.

But regular anglers told TNP that they have seen the animals.

"Every time the otters come, I do not get any bites from the fishes for a few hours. They scare away the fishes," said retiree Billy Ng, 60.

He said he visits the pond almost every day and usually sees the otters early in the morning.

"I hope that the otters can be moved away from the pond because I've paid for the time to fish here," he added.

Another angler seemed to welcome the otters. "They provide an interesting feature for visitors to the pond," said Mr Roland Tan, 66.

Mr Seng, however, fears the otters will grow so confident that they will attack the fishes kept inside his storage nets in the middle of the pond.

Worried, he has turned to the National Parks Board (NParks), the government agency that rents out the recreation area to him, for help.

"I'm hoping the authorities can help me before the damage gets out of hand," Mr Seng said.

Responding to TNP's queries, NPark's group director of parks, Mr Chia Seng Jiang, said in an e-mail that NParks staff had gone to the pond on Sept 30 to assess the situation.

"We are currently looking into various measures, including planting hedges near the pond to deter the otters from fishing there.

"We will also be putting up advisories in the vicinity of the pond to share more information about otters with the public," he said.

While Mr Seng hopes the measures will be successful, he is not holding his breath.

"I hope the hedges help, but the otters have legs and can move around the hedges," he said.

Until recent years, the smooth-coated otter was a rare sight in Singapore, where it was thought to have become extinct.

But now, they are not only seen often, but have also become a problem for home owners and hotels in Sentosa, as well as commercial fishing pond owners like D'Best Recreation's Mr Darren Seng.

Mr N. Sivasothi, a biological sciences lecturer at the National University of Singapore, told The New Paper that the high number of otter sightings can be attributed to our waterways becoming cleaner over the years.

"It was only in 1998 that the smooth-coated otter returned to the waters of Singapore," he said.

"As the waterways get cleaner, they would have more fishes, and it is only natural that the otters would explore their surroundings."

Mr Sivasothi, who has been involved in otter research in Singapore since the early 90s, added: "With the greening of the urban areas and the improvement in the waterways, wildlife will return to these areas."

In particular, many Singaporeans were excited to see three smooth-coated otter pups that were born and raised in Bishan-Ang Mo Kio Park in April last year.

The Asian small-clawed otter, the other species found in Singapore, is harder to spot because it is a nocturnal creature and can be found only in a few areas.

A spokesman for the Agri-Food and Veterinary Authority of Singapore said it received 42 instances of feedback on otters, mostly pertaining to sightings, from January last year to last month.

Only a small number of the feedback were on nuisance issues, which includeed the eating of fish in ponds.

It is illegal to kill or harm otters because, like all wildlife in Singapore, they are protected under the Wild Animals and Birds Act.

Mr Sivasothi hopes that the National Parks Board's plan to plant hedges along the fishing pond at D'Best Recreation would be enough to make it difficult for the otters to gain access to the pond.

Residents at Sentosa Cove installed motion sensor lights and barbed wire fences to keep otters from feeding in their fish ponds. One resident said the otters ate 22 of the 25 koi in her pond.

Hotels in Sentosa were also affected, with one hotel reporting a loss of $85,000 worth of fish over eight months.

A Sentosa Cove resident told My Paper she lost $64,000 worth of koi overnight.

Shangri-La's Rasa Sentosa Resort and Spa was also forced to temporarily relocate the koi from its pond after reportedly losing about $20,000 worth of the fish.