Otter family visited KK Women's and Children's Hospital, but did not feast from koi pond 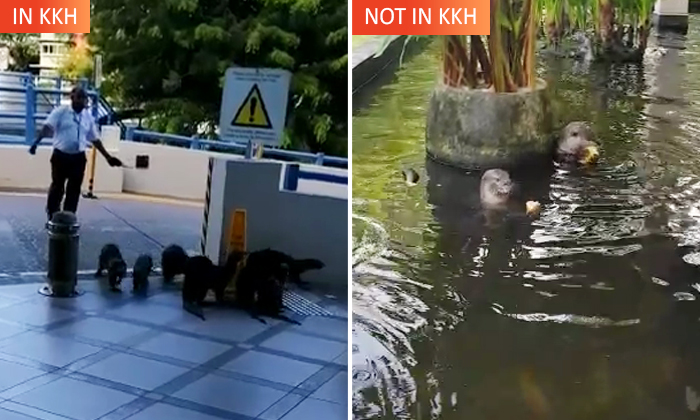 KK Women's and Children's Hospital (KKH) has clarified that a video showing otters munching on koi fish in a pond was not taken on its premises.

A video that surfaced last week shows otters from the Zouk family paying a visit to KKH.

In the one-minute video, a security officer can be seen trying to divert the cute creatures away from traffic and guiding them to safety.

KKH, which posted the video on its Facebook page, said: "Surprise visit from an otter family during this Circuit Breaker! They did not meet our visitation guidelines and left eventually. Wishing the otters safety in their journey!"

However, this video has also been making the rounds on WhatsApp along with a second clip that was not recorded in KKH, implying that both were taken at the same time and place.

The second video, which lasts 20 seconds, shows otters munching on koi fish in a pond.

KKH has since clarified that the second video was not recorded on its premises and said all of the fish in the hospital's koi pond remain safe.

The hospital said in a Facebook post on Sunday (May 11): "We are aware of a video circulating which shows otters eating koi fish, said to be from the pond in KKH. We would like to clarify that this is not true.

"The pond shown in the video is not the one in KKH and none of the koi fish in the KKH pond has been eaten by the otters.

"Since the sighting of otters in the vicinity of the hospital, our staff have been on heightened alert to maintain safety."

The otter family, which consists of five adults and three pups, got their name when they were sighted near the former Zouk site in Jiak Kim Street in the second half of 2018.

They made headlines earlier in March after turning up in a swimming pool at Park Infinia  @ Wee Nam condominium in Newton and after being seen having a feast at the Botanic Gardens.